8 Classic Scotches You May Have Missed Out On 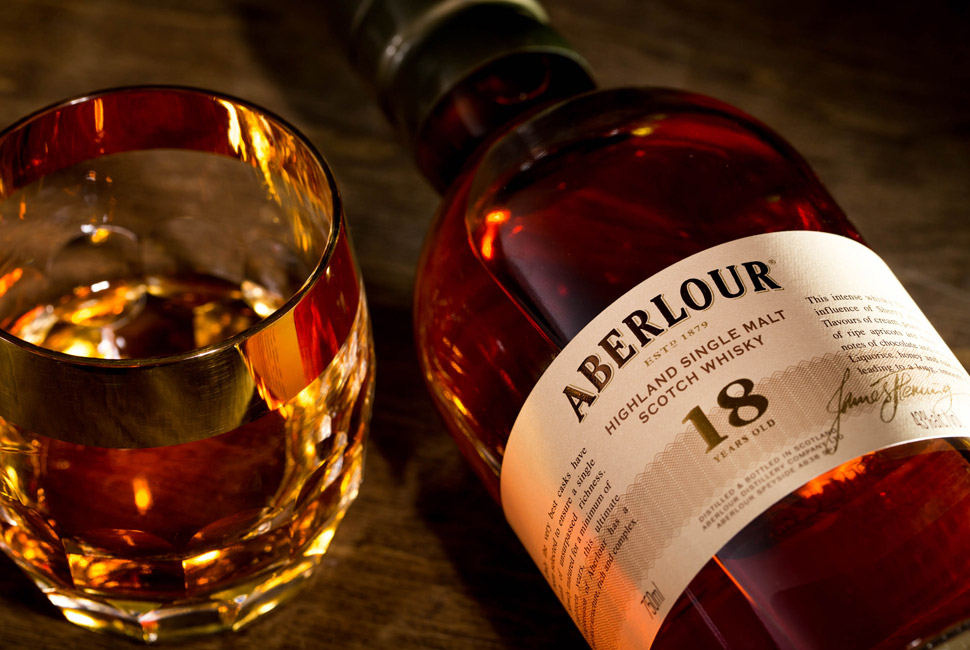 A true whiskey lover would definitely agree that there is nothing compared to the quality scotch or single malt. It offers the most complex, subtle and flavorsome taste experiences available.

Single malt whiskey is typically made from malted barley and still distilled using a traditional pot and then aged in oak casks for at least three years. And though you may be thinking that Scotland is the only place of production of these classic malts, Ireland, and some other places also possess some outstanding distilleries.

If you’re a buff, you may have appreciated the taste of your favorite scotch without caring to try some new ones. Though you may already be satisfied with your golden drink and there is no need to taste every scotch produced in the world. There are many scotches worth your booze.

So get ready whiskey aficionados and scotch lovers, here is your complete guide to the scotches that you won’t want to miss:

Aberlour was first introduced in the French market. It was released for general consumption in 2008.

Aberlour 18 years old is made with the best local ingredients of barley and soft water. The expertly crafted new spirit is usually matured for a minimum of 12 years both in the finest hand-picked Oloroso Sherry butts and Oak barrels. This double cask maturation subtly brings together the characteristics of each cask to create a truly rich and rewardingly complex range of single malts.

A little spoon with water makes the dram sweeter and smoother. Plums might appear. Dilute it until it tastes good.

You may have it without dilution too and get the pure taste of the classic malt.

The luxurious malt earned the Best Single Malt Scotch Trophy at the International Wine and Spirits Competition in 2013. It’s one expensive drink of $217 but definitely worth it.

Glenmorangie’s water source is the Tarlogie Springs. Barley grain is supplied by Highland Grain Ltd. Glenmorangie uses a number of different cask types, with all products being matured in white oak casks.

These new casks are left to air for two years before being leased to distilleries. Glenmorangie then uses the barrels to mature their spirit.

The warehouses in which the casks are stored are also believed to affect the taste of the whiskey. The bottling of the Glenmorangie and Ardbeg brands takes place at The Glenmorangie Company’s purpose-built bottling plant in The Alba Campus.

It’s preferred to consume it neat, but it mixes exceptionally well, too.

A little water will soften the alcohol, causing a change in the texture and bouquet of the whiskey, and revealing further layers of aromas and complexity.

Having it on the rocks will close down the top notes that were released with water accentuating instead the base flavors from the oak barrel.

Try it as a mixed drink, the deliciously easy Whiskey dip by mixing it with 2 oz. Scotch and 1 tablespoon pineapple syrup. Garnish with orange peel and serve. 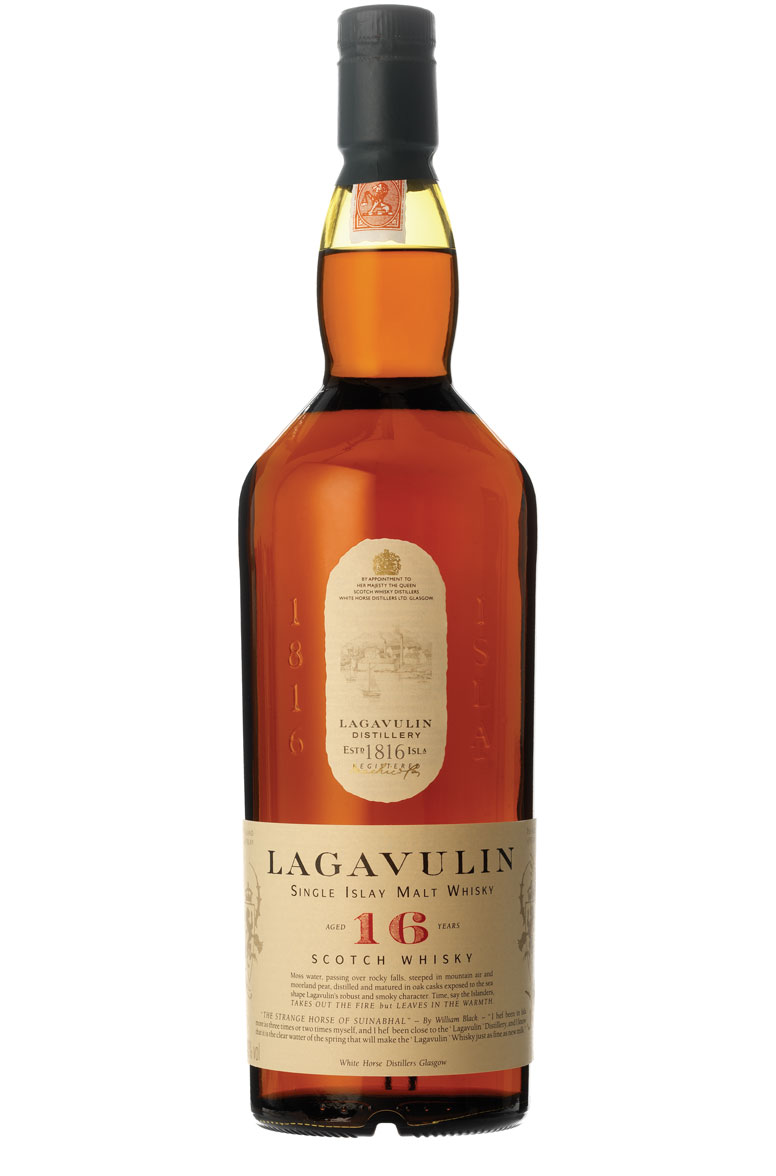 Lagavulin 16-year-old is the best scotch within budget costing you only $53 for the impeccable richness and dryness that turns it into a truly interesting tipple.

Situated on the banks of Lagavulin Bay on the island of Islay, Lagavulin Distillery is one of the oldest distilleries in Scotland. The malt is prepared using peated barley. After harvesting and malting, these are dried over a peat and gas fire.

The grains are milled and mashed before being fermented for approximately 72 hours.

Following distillation, the whiskey is matured for sixteen years in second-fill.

As a result of this maturation process, together with the unique barley-drying process used at the distillery, the single malt has an intense aroma of peaty smoke, wood spices, and Earl Grey tea.

Lagavulin 16 Year Old demands to be served in a traditional whiskey glass, neat or with a little water.

Pour 1 to 2 ounces of Lagavulin scotch into a tulip-shaped glass with a stem you can hold. Swirl the whiskey gently in the glass, holding it at an angle. Pass the glass under your nose in a smooth motion, taking a deep breath in. Form a spoon-shape with your tongue and take a small sip, allowing the whiskey to rest on your tongue. Add Scottish spring water if you wish, but no more than 20 percent of the total amount of liquid in the glass should be water.

If you’re looking for a food pairing for this beauty, try intensely flavored salty blue cheese. 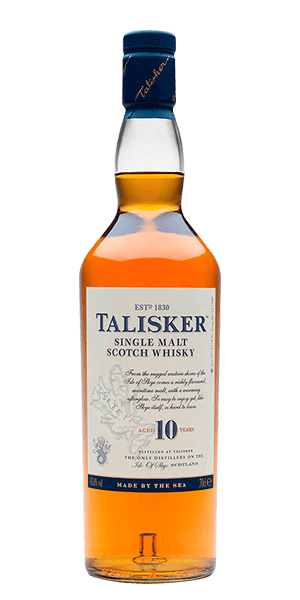 The system uses worm tubs instead of modern condensers since these are believed to deliver a fuller flavor. On top of that, the pipes are looped so the alcohol vapor is already in the midst of condensing before reaching the worm tubs. Throw in that it’s a middlingly peated malt made with water that flows over peat for good measure.

The warm, subtle smokiness of Talisker 10 Year Old should be sampled neat. But with a few drops of water, the flavor opens up in new ways, with the Talisker becoming almost milky and sweeter with the pepper and peat flavors becoming more rounded. 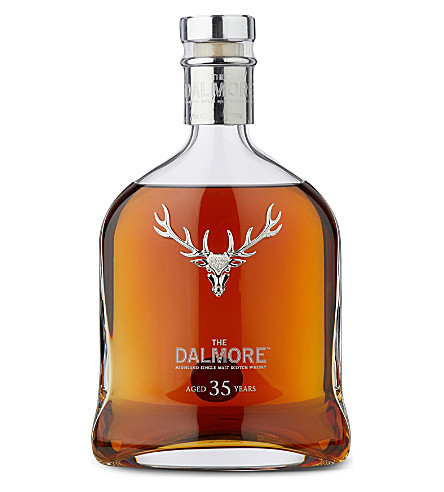 The malt is prepared from the distillery’s most exceptional stocks. Dalmore 35 has been aged in three types of cask: a Matusalem sherry, a bourbon barrel and a colheita-port pipe and is one really expensive piece but definitely worth it.

It is presented in a hand-blown Baccarat crystal decanter, adorned with a silver Dalmore stag emblem. Just 1000 bottles will be released every year, for five years.

The rare whiskey must be taken neat and served in an old fashioned glass.

The 21-year-old has been aged using sherry casks, which has led to flavors of dark chocolate, anise and summer berries with some sweetness. Royal Brackla is a beautiful highland distillery specifically geared at making light and fruity malt, with a very clear long fermentation of 70 hours and stills designed to create massive reflux. It was established in 1812 by Captain William Fraser.

It has a voluptuous texture with a tingle of spice and a hint of smoke in the finish. Water reduces the vegetal notes, but the aroma is still earthy. So its best enjoyed straight.

The outstanding drink is aged in refill American oak casks and then finished in first fill European oak Sherry casks. DoubleWood is an excellent example of what the Balvenie distillery can craft, even at 12 years.

It is advised putting this in the freezer and then pouring yourself a nice good sized glass. The natural sweetness of this whiskey makes it a delightful sip mainly as it’s best left to breathe a little, chilling it means you can dive straight in and enjoy the journey. As the glass warms in your hands each sip gets ever so much more flavorful.

It’s made with approximately 50% fully peated stock which happens as Highland Park’s peated floor malt is mixed with unpeated malt that’s bought in at a ratio of 1:4 before mashing, but of course with Highland Park, this means Orcadian peat and classic heather smoke notes.

Enjoy simply served neat, over ice or with a little water

So here ends the diverse journey to some of the best classic scotches you may have missed out on. Some are pricey, some are affordable but they all are definitely worth it. Drinking Whiskey in moderation have some amazing health benefits, add a glass to your day for healthy living.

Harold Camaya has been closely studying the liquor industry trends for quite some time. Intrigued by the booming growth of this sector, she takes interest in penning down his views providing quality insight on current trends.

View all posts by Harold Camaya →