The Collaboration Between Signature Brew and The Darkness

Posted on November 16, 2020 by DrinkPreneur in Marketing 0 Comments 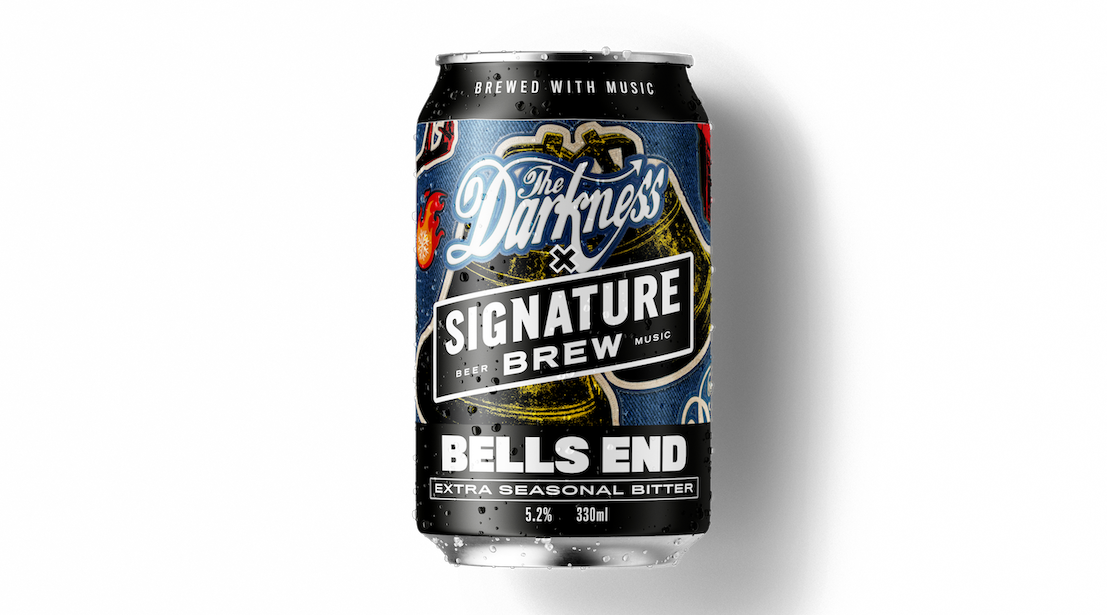 East London brewery, Signature Brew, is on a mission: to revolutionise the quality of beer at live music events. Launched in 2011, Signature is the world’s number one brewery for band collaboration beers, having brewed with IDLES, Mogwai, Alt-J, Slaves, Mastodon, Frank Turner, Rodney P, Enter Shikari, Sports Team, Dynamite MC and many more.

Lockdown saw Signature Brew create the award-winning Pub in a Box, hand-delivered by out of work musicians (now also available in a festive edition). With Christmas coming, and Signature Brew’s venues currently operating as takeaway only, they have collaborated with their friends, joyously bombastic rock idols, The Darkness, to create Bells End, an Extra Seasonal Bitter that’s bound to soften the blow of Lockdown 2.0 and keep winter 2020 festive.

Taking its name from The Darkness’ hit Christmas single, Christmastime (Don’t Let The Bells End), this warming winter beer sees English hops unleash a mouth-watering bitterness to carry you through the season. On pouring out the brew, you’ll find a clear, deep copper beer with medium-low carbonation; on the nose is a little stone fruit, toffee and light, earthy hops and you’ll be greeted with wintery and wild, spicy blackcurrant fruitiness and a firm bitterness which balances the complex rich, sweet toffee flavours of the malt.

“We were really excited to brew with The Darkness, we love their music, and the experience didn’t disappoint. The band visited the brewery several times and we collaborated closely with them to find the perfect beer style and the perfect name. 2020 has been a tough one for everyone. We’ve worked with musicians throughout the year, from our socially-distanced brewery shows to enlisting bands to help deliver our now legendary Pub In A Box. As we approach the end of the year everyone needs a laugh and a tasty beer – and Bells End will definitely satisfy both.”

“The tasting session for Bells End went well, it was a big night and we tried every ale that we could think of. We wanted a beer that’s punchy and drinkable at the same time. Signature Brew really know their stuff and captured exactly what we were after. Bells End has got a bit of oomph to it but it’s something you can drink in the run up to Christmas and throughout the whole season. It’s a very wintery beer, it’s perfect and we can’t wait for everyone to try it.”

Led by founders Sam McGregor and Tom Bott, the Signature brewery team is made up of musicians and music fans alike and – with an unwavering commitment to quality – Signature Brew has channelled the spirit and energy of live music into a brewery that stands for craftsmanship, artistry and passion. Brewed in Walthamstow, enjoyed by beer lovers and music superfans globally, their beers are of unrivalled quality, and they were crowned SIBA’s highly prestigious Brewery Business of the Year 2018.

2020’s Covid 19 crisis has seen Signature Brew get creative to keep the beer flowing in people’s homes, creating the Pub in a Box, hand delivered in London by musicians who had their tours cancelled (paid London Living Wage) and delivered via courier nationally. Signature Brew hosted a series of socially distanced gigs at the brewery to keep live music playing, they’re also prepping for the sold out Piss up in a Brewery (when all of this blows over), as well as two Skints gigs (their first in E17 for 10 years) as something for everyone to look forward to – we can all raise a glass to that! Signature Brew are gearing up for a momentous 2021, a year that will see the brewery rally around venues and musicians whilst celebrating their 10th Birthday with many more live shows, exclusive beers and band collaborations.