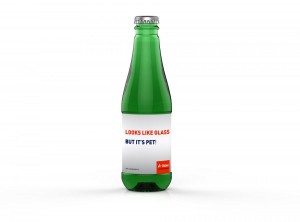 PET has transformed the bottled water and carbonated soft drinks markets.  It has had less success with beer, fruit drinks and milk.

Now Sidel has come up with a real contender for beer.  Its new bottle:

At the moment, although 5 billion bottles of beer are sold in PET each year, this represents only 2% of total consumption.  It’s not hard to imagine this figure rising substantially in the coming years.