Posted on October 3, 2014 by DrinkPreneur in Beverage News, Marketing 8 Comments 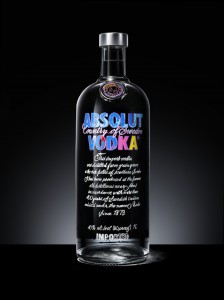 Absolut proudly introduces the Andy Warhol Edition, a new limited edition bottle celebrating creativity, pop art and the brand’s iconic collaboration with Andy Warhol. To launch the bottle, Absolut will collaborate with him once again by working with three artists who will reach out to Warhol’s spirit for a one-time-only nightlife experience in NYC, as well as, inviting people to unleash their creativity in what Absolut aims to become world’s largest art exchange — where one lucky participant will receive an original Andy Warhol artwork.

The Andy Warhol Edition celebrates the iconic collaboration between Absolut and Andy Warhol – the brand’s first of thousands of collaborations with artists from around the world. By transforming the original painting onto the bottle shape, Absolut is allowing anyone to bring home their very own Warhol. To support the launch of this limited edition bottle, Absolut is presenting two innovative concepts: Warhol Spirit by Absolut, which pushes the boundaries of art and nightlife, inspiring audiences to realize anything is possible through creativity, as well as Andy Warhol Art Exchange by Absolut, which invites audiences to join in on the creative process by making their own art.

“With this limited edition, we raise our glasses to honor the partnership between Absolut and Andy Warhol – a collaboration that resulted in one of the most iconic contemporary works of art. The original Absolut Warhol painting hangs firmly in a museum but this initiative brings Andy Warhol’s artwork to the world,” says Nodjame Fouad, Director of Storytelling at Absolut.

“The Foundation is delighted to celebrate the launch of the Andy Warhol Edition and proud to announce that a portion of the proceeds will contribute generously to The Foundation’s endowment from which it has distributed nearly $250M in grants supporting contemporary visual arts,” said Michael Hermann of The Andy Warhol Foundation. “While Warhol’s profound influence is uncontained we applaud Absolut for bottling his creativity.”

In celebration of the new Andy Warhol Edition, Absolut will collaborate with Andy Warhol once again by reaching out to his spirit for a one-of-a-kind nightlife experience in NYC. During the experience, DJ A-Trak, light artist and experimental EVP artist Leif Elggren, will work together to transform sound waves originating from Warhol’s spirit into a one-of-a-kind nightlife experience. Using the sound waves as the main input, the three artists will create a live-collaboration where interactive light installation will react to A-Trak’s music, which mixes in Andy Warhol’s words picked up by Leif Elggren’s EVP machine. Through this truly unique experience, Absolut seeks to inspire audiences to realize anything is possible through creativity.

Having partnered with thousands of artists since launching the first artist collaboration with Warhol in 1986, this experience is the latest rule-breaking artistic collaboration from Absolut. Not only does this collaboration transform nightlife in a never-been-done way, but it also poses a question that Warhol himself may have asked: “Are they really connecting with Warhol or is this just a stunt?”

To allow audiences anywhere in the world to experience the connection with Warhol, an interactive site will live-stream what sounds are picked up from the EVP before, during, and after the event.

The experience is part of the Nights by Absolut program, which brings the brand’s Transform Today campaign to life through a series of transformative artistic experiences. By reimagining what is possible in nightlife through these experiences, Absolut hopes to inspire audience to raise the bar for what to expect from a night out, and empower them to transform their own nights.

To see how the artists prepare for the performance, follow it live or see what happened at the event on absolut.com/warholspirit.

Starting October 1, Absolut also invites people from around the world to unleash their creative spirits and enter The Andy Warhol Art Exchange by Absolut – which Absolut aims to become the world’s largest online art exchange. Users can participate by submitting or creating a piece of digital art, and will get one in return from another participant somewhere in the world.

Everyone will be a winner in the art exchange, and some lucky participants will get to exchange art works with artists Ryder Ripps, Taylor Mckimens or any of the other famous artists participating in the exchange. There is even an original Andy Warhol artwork that has been included in the exchange.

At absolut.com/artexchange, Absolut provides fun and easy-to-use generative art tools, enabling anyone to be an artist. The site will also accept most image files and formats, including uploads via Instagram, Facebook and Twitter. With these tools, Absolut manifest that creative transformation is within reach for everyone.

The Andy Warhol Art Exchange by Absolut runs from October to December, with exchanges happening at the end of each month. Participants above legal drinking age, from anywhere in the world, are welcome to enter.