Posted on April 11, 2018 by DrinkPreneur in Brand News 0 Comments 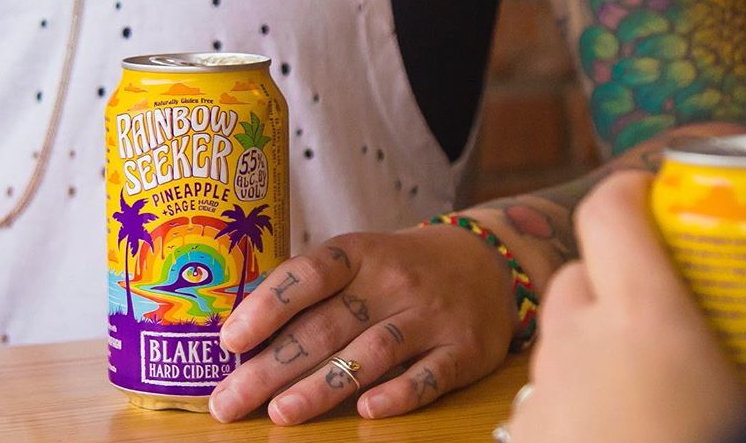 Blake’s Hard Cider, the largest craft hard cider brand in the Midwest, is introducing an inspired beverage concept that is equal parts refreshing and meaningful – with a sizable portion of proceeds going to leading LGBTQ civil rights organization, The Human Rights Campaign® (HRC).

Blake’s Rainbow Seeker is a delicious specialty cider featuring a semi-sweet blend of Michigan-grown apples infused with real pineapple and a hint of sage. The all-natural, gluten-free cider features a 5.5% ABV and it arrives in stores in May across all 19 states of Blake’s distribution footprint. Customers can find the tropical cider in most Midwest Meijer locations and all Michigan Kroger’s. Proceeds from Rainbow Seeker, the first of Blake’s Kinder Cider Series, will fund a $40,000 direct donation to advance civil rights and equality programs spearheaded by HRC. The cider will flow from taps across Blake’s footprint on Friday, April 27.

“Rainbow Seeker is the first installment in what I believe is a kinder cider platform for Blake’s,” said Andrew Blake, owner and founder of Blake’s Hard Cider. “Our brand has grown quickly, and with that evolution comes opportunity to make a difference and to bring awareness to social and environmental issues that have great personal and communal meaning. As with everything we do at Blake’s, we’ll do what we believe is right.”

Rainbow Seeker will be sold in 12-ounce cans in six-pack form and on draft throughout Blake’s distribution network for the duration of the summer. Each six pack has a suggested retail price of $10.99 – $11.99 per with a portion of program proceeds going directly to HRC. The brand is currently sold in Michigan, Illinois, Indiana, Wisconsin, Ohio, Minnesota, North Dakota, South Dakota, Kentucky, Tennessee, Pennsylvania, North Carolina, South Carolina, Alabama, Georgia, New Jersey and Florida. It will be launching in Virginia and Washington D.C. this Spring.

The HRC is America’s largest civil rights organization. Its three million members and supporters work to advance a future where LGBTQ people are ensured of their basic equal rights, and can be open, honest and safe at home, at work and in the community.

“We are grateful to Andrew and the Blake’s team for their generous support of LGBTQ equality,” said HRC President Chad Griffin. “This is a fun concept that we can all embrace, yet it comes at a serious moment in time when we are working harder than ever to push back against anti-equality sentiment.”

Blake’s will partner with distributors, retailers, restaurant and bar partners to host events during June Gay Pride Month and in the fall for National Coming Out Day.

“We’ll produce 120,000 cans and we’ll distribute those cans to 19 states,” said Blake. “We see it as 120,000 great opportunities to encourage people to be kind, support equality and simply be good to one another.”

Rainbow Seeker is the first installment of the Blake’s Hard Cider Co. Kinder Cider Series – a series that will bring awareness to social and environmental issues that directly impact Blake’s small farm community. If you would like to get involved in this movement, visit blakeshardcider.com/donate.