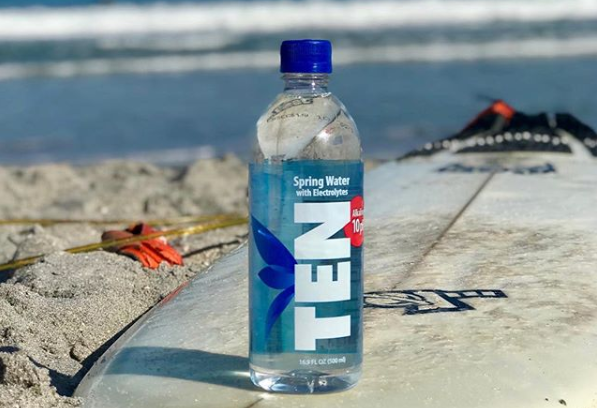 This month, TEN Spring Water proudly celebrates its fifth year of operations. The premier alkaline water brand has made major strides since its launch in 2013, and in five short years has evolved from a start-up to being available in over 4,000 brick-and-mortar stores and online. TEN is the only high-pH (above 9) bottled water sourced directly from America’s natural springs, and features the highest alkalinity of any water on the market (10pH).

TEN Spring Water’s CEO Jose Fernandez credits the company’s success in the competitive bottled water market to consumers’ interest in high-alkaline diets and increased public concern and awareness surrounding municipal water sources. The bottled water company, which was already selling in thousands of chain stores and specialty grocers across the country including Publix, recently signed on with national grocer giant Food Lion and is being sold at an additional 1000+ stores beginning this Spring.

“We are so proud of what our brand has evolved into, and our retail expansion really tells the story of our success,” says Fernandez. “The number of fitness conscious consumers, influencers and professional athletes who choose TEN Water also continues to grow exponentially, and is a testament to the quality of our product.”

The company’s initial product development began in 2012 and TEN Spring Water officially launched in May of 2013. Over the past five years, its distribution targets grew from natural grocery stores to a national broker sales network that stretched from the southeast to the northeast and soon spread to the mid-west and southwest by 2016. Its successful entry into conventional supermarkets followed soon after, and by 2016 it was being sold at Publix, the largest grocery chain in the Southeast market. The company began exporting a Hispanic-branded product to the Dominican Republic in 2015 and future plans call for expanding the brand both domestically and internationally through additional sales and distribution channels.

“As we look forward, we hope to continue growing our national retail footprint and expand into Canada and other international regions,” said Fernandez. “We pride ourselves on providing our customers with the highest quality hydration, and as we expand we will continue to focus on ensuring that TEN is accessible to consumers everywhere.”

Bottled at 10pH, TEN holds the distinction as having the highest pH level of any bottled water. Sourced only from natural springs and never from a tap, the water is enhanced with an original patented pH/electrolyte formula and bottled in BPA-free bottles, which are packaged in multiple configurations: 500 ml, 1 liter, 1.5 liter and a one-gallon jug.