Posted on November 24, 2020 by DrinkPreneur in Market 0 Comments 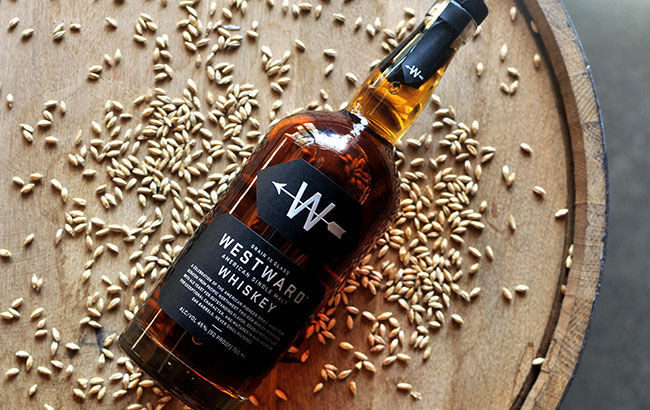 Westward American Single Malt Pinot Noir Cask is a truly elegant whiskey, influenced by Oregon’s premier grape varietal: Pinot Noir. This blend of cask-finished whiskeys is created in partnership with a handful of iconic Willamette Valley producers, including Bergstrom Wines and Suzor Wines, among others. The spirit reflects the vibrance of the winemaking region’s signature grape while allowing the bold, robust notes of the whiskey to shine. Westward’s Pinot Noir Cask begins with original Westward American Single Malt, which is made from scratch using Pacific Northwest two-row barley, brewed with American pale ale yeast for outstanding flavor, double pot distilled for exceptional character, and matured in 2-char, kiln dried 53-gallon new American oak barrels. The whiskey is then finished for up to two years in French Oak wine casks that previously held Pinot Noir. It is bottled at 90 proof (45% ABV) and priced at $89.99.

At Westward, great reverence is given to the resources found naturally in the Northwest.  The abundance of the region gives Westward both the best raw materials and the best craftspeople. Westward is proudly handmade by a collection of world class distillers, each of whom follow their ‘True Northwest,’ a rally cry now featured on the new bottle design, as they draw inspiration from the region’s majestic surroundings and pursue their ambitions as artisans and whiskey makers at the Westward Whiskey Distillery in Portland, Oregon. Westward’s new visual overhaul is a tribute to this sentiment, and the cuts and edges reflected in the bottle mirror the raw beauty and dramatic mountain ranges found in the American Northwest, Likewise, the new, angular label is designed to reflect the mountain peaks of Westward’s origin and capture the craftsmanship that goes into perfecting its whiskeys every day.

“At Westward, there are no shortcuts, and therein lies the beauty. We pursue perfection by raising a world class whiskey through our long, slow, process,” said Thomas Mooney, CEO and Co-Founder, Westward Whiskey. “Today, we celebrate the culmination of a project we have worked on for the last two years. Our new custom bottle and design expresses the uncompromising spirit of the American Northwest, and they represent Westward’s meticulous devotion to our process, culture, climate, and ingredients. We’re thrilled to introduce a new, elevated visual identity that further highlights the beauty of our award-winning whiskeys.”

Westward’s new visual identity and packaging was developed in collaboration with Pearlfisher, an award-winning design agency. The company’s enthusiastic group of creatives worked diligently to capture the essence of Westward and its commitment to quality.

As part of this redesign, Westward has also unveiled a new brand home at WestwardWhiskey.com. In addition to a robust shipping capability throughout Westward’s home state of Oregon, the company’s portfolio of award-winning whiskeys will now be able to ship nationally directly through the company’s site.

Single Malt, reimagined. Born of the unique culture, climate and abundant resources of the Northwest, this elevated American original demonstrates our craftsmanship and creativity. Our distinct, rich, and brazen American Single Malt  is the pinnacle of whiskey. Created from locally malted barley, brewed with ale yeast for exceptional flavor, and matured to perfection in new, lightly charred American Oak barrels right here in Oregon, where our hot, dry summers and cool, wet winters are the ideal environment to raise a world class whiskey.

A celebration of Oregon’s legendary brewing culture, this whiskey grew out of our longstanding cask-trading tradition among a select group of beer producers in the Northwest. For as long as we’ve been making whiskey, we’ve traded our freshly-emptied barrels with some of our brewing friends in and around the Northwest, who have in turn “seasoned” them with Stout before returning them again. Our Stout Cask Finish begins with our Westward American Single Malt, and is then aged for one year in Stout casks.

A tribute to Oregon’s legendary Willamette Valley wine country, this elegant whiskey is influenced by the region’s premier grape varietal: Pinot Noir. This cask-finished whiskey reflects the vibrance of the Valley’s signature grape while allowing the bold, robust notes of our whiskey to shine through. Our Pinot Noir Cask begins with our original Westward American Single Malt, which is then finished for up to two years in French Oak wine casks from a handful of award-winning producers in the region.