Posted on October 28, 2019 by DrinkPreneur in Packaging 0 Comments 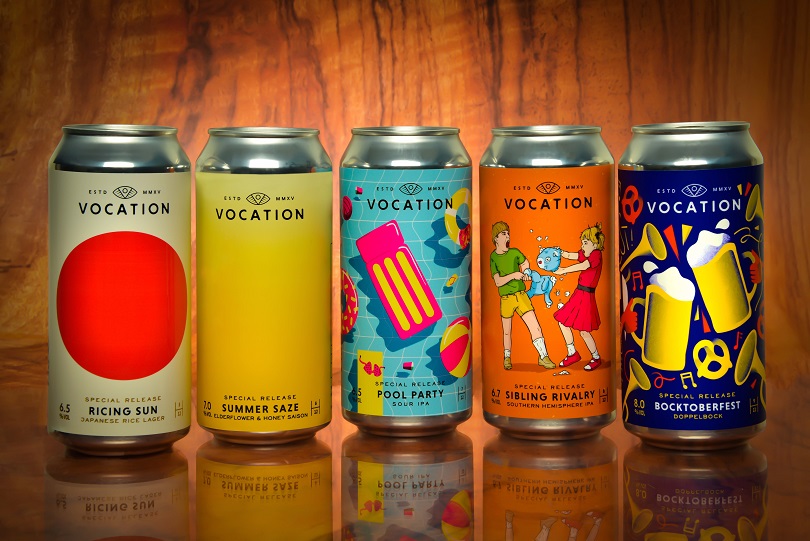 The Label Makers has produced a range of striking new labels for a special release beer series by West Yorkshire-based Vocation Brewery. Noted for making bold statements with their modern brews, the craft brewery is giving traditional beer branding a wide berth, in favor of some vibrant designs to match the liveliness of their new releases.

As a limited-edition initiative for 2019, the special release series consists of twelve new beers in can and keg formats, with each being released monthly. The range, which challenged their brew team to come up with twelve completely new recipes, started in January with ‘Seeing Dubbel’, rich and decadent plum and vanilla Belgian Dubbel. Hot on the heels of Seeing Dubbel was February’s release, Tough Nut, an imperial nut-brown ale packed full of earthy English hops. During the summer they released ‘Summer Saze’, an elderflower and honey saison, and ‘Pool Party’ which was a sour IPA. The latest release from the series is ‘Bocktoberfest,’ which is a rich German-style doppelbock. The compelling series is exclusive to independent retailers.

The Label Makers’ new nine labels for the series to-date, have been produced in relatively low volumes of between 2,500 and 4,000 units for each can design.

Alastair Fielding, key accounts manager at The Label Makers, said: “It has been great to work with these playful and vibrant designs. The labels have been printed digitally to achieve a quick turnaround to accommodate the short lead-time and limited volumes of this monthly range.

“The labels were finished on the AB Graphic Digicon Series 3, creating a mix of tactile finishes and cementing the quirky yet fun nature of the products. High build screens and spot gloss varnish finishes have been used to give the completed product added value and a heightened experience for consumers.”

“We have also supplied labels for Vocation’s ‘Hang Loose’ craft beer release, which is stocked by a major retailer. To create another unconventional finish, we used a sandpaper varnish, which feels exactly as it sounds! It is fantastic to work with a brewery with such a diverse range of products, variations in volume and who push the boundaries in design and finishes to the limit.”

Rachael Pinder, head of operations at Vocation Brewery, said: “It has been great to bring together three thriving companies in West Yorkshire, with our brewery in Hebden Bridge, our designers, Robot Food, in Leeds, and the experts at The Label Makers in Bradford.”

“We chose The Label Makers because we were extremely impressed with their flexibility and ability to react to whatever the designers threw at them! They deliver quality in a timely fashion, always quick to respond to our needs. Following the response to this series so far, we are now looking to produce another specials range, so watch this space!”