Sugar skull Rum invites You to Live…Love… and celebrate! 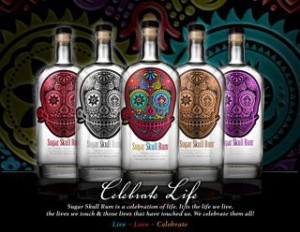 Cocktail lovers, it’s time to raise a glass!Sugar Skull Rum, a meticulously-crafted super-premium Rum made from fine Caribbean sugar cane molasses, is coming to a celebration near you.

“The premium and super-premium spirits categories have been growing consistently for most of the past two decades, outpacing the spirits market in general,” said J. Smoke Wallin, CEO, Taliera, LLC, exclusive global sales, marketing and distribution agent for Sugar Skull Rum. “Despite its size, the Rum category has yet to produce a break-out brand in the $25-30 price category. Sugar Skull Rum will be that brand.”

Sugar Skull Rum (SRP $27.99, 750ml) is an artisan Rum, made from the very best sugar cane molasses carefully sourced from growers’ farms throughout the Caribbean and South America. Our Rum is produced at partner distilleries in the Caribbean Islands, who use four-column stills to produce a clean and crisp base Rum, before it is brought into the U.S., where it is filtered, blended and flavored with natural ingredients to produce Sugar Skull’s unique taste.

Simply delicious and endlessly versatile, Sugar Skull Rum cuts across traditional product categories and will appeal to anyone who loves a great cocktail and a fun time. “It is a true crossover spirit that can be enjoyed straight, on the rocks or mixed in a number of innovative and traditional cocktails,” says Wallin.

The brand’s distinctive name and packaging honor the Dia de los Muertos. Often mis-understood as a slightly morbid relative of Halloween, the ‘Day of the Dead’ is a convergence of European Catholic and ancient Aztec traditions that celebrate those who have left this world but mean so much to the people they touched.

“Sugar Skull Rum was founded on the principle that life should be celebrated and is at its best when we celebrate those who are important to us,” said Wallin. “We like being a part of what – and who – people love, so if there is a great time to be had, Sugar Skull Rum will be there. Join us!”

Sugar Skull Rum is initially available in Arizona, California, Nevada and Florida, with a selective rollout planned in additional major markets in early 2015.