Posted on May 27, 2016 by DrinkPreneur in Beverage News, Marketing 0 Comments 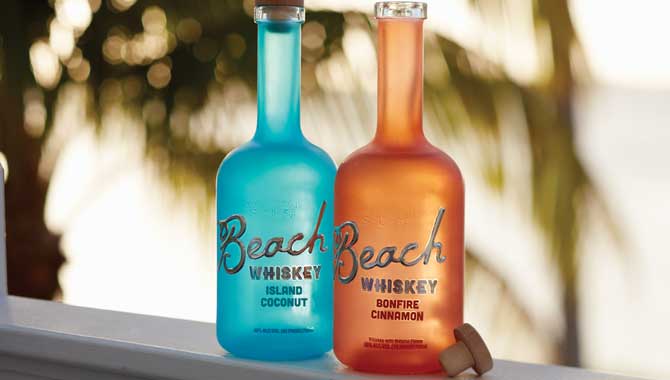 Beach Whiskey, LLC announced today the closing of its oversubscribed $7.5 million Series A financing round set to fund the national launch of its inaugural portfolio of naturally flavored American whiskey. The Company was formed in early 2015 and after an initial seed capital round of $458 thousand, set out to fully capitalize the business at the beginning of 2016.

Launching June 2016, Beach Whiskey™ invokes a new sentiment for American whiskey, celebrating the beach lifestyle with unconventional flavor profiles and distinguished packaging with the signature etched label on custom sea glass bottles. With the intention of summoning the spirit of the beach life with smooth day-drinkable whiskey, the Beach Whiskey portfolio consists of Bonfire Cinnamon™ (35% ABV / 70 proof) and Island Coconut™ (26% ABV / 52 proof), each 750 ml with a SRP of $23.99.

“This funding will allow us to properly launch Beach Whiskey with our distributors and on-premise national account partners,” said J. Smoke Wallin, co-founder & CEO of Beach Whiskey and a serial entrepreneur in the drinks industry.

“Our group of world class investors, board and advisory board members is a testament to Beach Whiskey’s unique take on the rapidly growing whiskey market.”

Beach Whiskey will use the funding to bring its Coconut and Cinnamon whiskeys to market in California, Florida and Hawaii initially, followed by other select markets. Significant investments in brand marketing, in-store and bar promotions, tastings and live events will maximize brand exposure and trial.

Wallin continued, “Beach Whiskey is the smoothest adult beverage I’ve ever tasted. A big part of our plan is simply to get liquid to lips. The rest will take care of itself.”