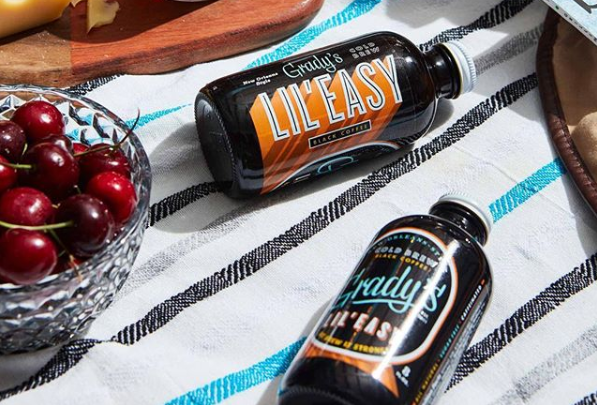 Grady’s Cold Brew, one of the original brewers and bottlers of craft cold brew, is debuting two new flavors of coffee concentrate this summer: French Vanilla and Hazelnut Mocha. This marks the first new flavor additions to the lineup since the company introduced its famous New Orleans–Style Cold Brew in 2011.

“The reaction has been, ‘What took you so long?'” jokes Grady Laird, co-founder and namesake of the brand. “We wanted a memorable signature flavor that was recognized coast to coast before introducing variations.”

The two new flavors build on the original New Orleans–Style blend—100% Arabic beans from Indonesian and Ethiopian and roasted French chicory—with the addition of all-natural chocolate/hazelnut and vanilla. The Hazelnut Mocha was inspired by Grady’s love of Nutella spread; the French Vanilla, by employees of Grady’s Cold Brew who had been mixing vanilla milk into the classic concentrate.

“Flavored coffee has a reputation of being overpowering and artificial, but a large segment of coffee drinkers want subtlety, not a mouth-numbing sugar explosion,” says Laird. “We aren’t talking Doritos Extreme Jacked Sriracha Ranch flavor levels here, because we didn’t want to completely obliterate the base coffee notes that make our brew special. This is flavored cold brew that can appeal to those who drink their coffee black—and to those who prefer to sweeten things up.”

The new additions will be produced in-house at Grady’s brewery located in the Bronx neighborhood of Hunts Point. The company’s proprietary cold brew process—with freshly roasted beans from Porto Rico Importing (a New York institution since 1907) and a special spice blend, brewed for 20 hours before bottling—produces the richest and smoothest coffee on the market.