Posted on March 23, 2020 by DrinkPreneur in Brand News 0 Comments 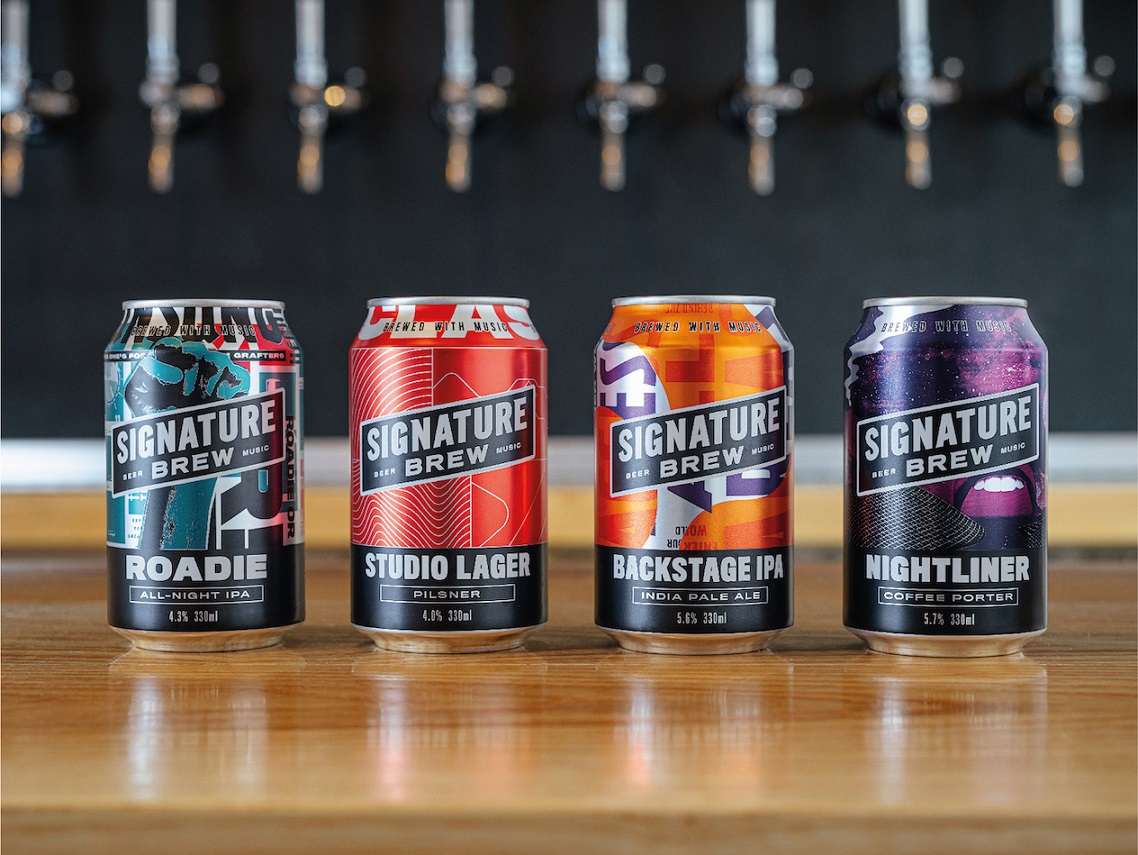 East London based Signature Brew is on a mission: to revolutionise the quality of beer at live music events. Launched in 2011, Signature is the world’s number one brewery for band collaboration beers, having brewed with Idles, Mogwai, Alt-J, Slaves, Mastodon, Frank Turner, Rodney P, Enter Shikari and many more. With a fresh look and feel from renowned branding experts, B&B, 2020 sees Signature launch their core range of music-inspired craft beers to the very best bars, venues, festivals and shops around the world. Brewed in Walthamstow, enjoyed by beer lovers and music superfans globally, Signature don’t just create exciting collabs, their beers are of unrivalled quality, and they were crowned SIBA’s highly prestigious Brewery Business of the Year 2018.

Led by founders Sam McGregor and Tom Bott, the brewery team is made up of musicians and music fans alike and – with an unwavering commitment to quality – Signature Brew has channelled the spirit and energy of live music into a brewery that stands for craftsmanship, artistry and passion. Their SIBA win enabled the small team to scale up, launching a successful crowdfund, enabling Signature to build the UK’s most state-of-the-art brewery for its size, immediately quadrupling capacity to an initial annual output of 20kHL (4 million pints) – a significant step up from their previous 5kHL brewery.

Carefully timed to coincide with the launch of the new brewery, the rebrand draws on the art, energy and passion of live music. Each can riffs on a blend of genres from punk rock, to jazz, to the psychedelic and comes with expanded gig poster artwork. The cans are now as vibrant, characterful and exciting as the beer contained within them and the range of art styles mirrors the brewery’s love of all genres, the creativity of their brewers and the diversity of the musicians they work with.

An ideal entry into the world of Signature Brew is The Lineup (£10 per 4-pack of 330cl cans), Signature’s four multi award-winning beers combined into a tasty gift pack ready to drench your senses and satisfy every beer drinker’s tastes. Saluting the unsung heroes of the music industry is Roadie, a refreshing beer, loaded up with citrus notes – fit for road crews the world over (All-Night IPA, 4.3%); offering all the notes of an instant classic, Studio is a clean and crisp Czech-style pilsner with unmistakable floral hits and a deliciously bitter finish (Pilsner, 4.0%); an access-all-areas experience like no other, Backstage IPA welcomes you into a world of tropical flavour (India Pale Ale, 5.6%) and lastly, taking you on a journey into the night, just like its tour bus namesake, is Nightliner, intense coffee tones with notes of dark chocolate (Coffee Porter, 5.7%). There are no support acts here, just headliner after headliner.

At the heart of the Signature brand are their groundbreaking collaborations, taking respected, genre-spanning bands and working with them to create their ideal beer. The most recent band collab was electrifying punk band, Idles. ‘KRFSHT!’ (AKA the almighty sound of a can of beer opening) was launched in December ’19, the beer’s unconventional name was conceived by the band’s frontman, Joe Talbot. The singer also designed the artwork and the beer’s style, a toasted lager, was decided on by the band and developed by Signature Brew’s award-winning brew team. Already sold out, KRFSHT was available to drink and take away on the weekend of the band’s Alexandra Palace show from Friday 6th December onwards and exclusively via Signature’s venues and website.

“Our band collaborations are always fun,” explains Signature Brew co-founder Sam. “We always start with a tasting with the artists, we drink beer and decide on a style that suits them. The band then gets hands-on helping our brewers to make the beer itself. And we love a good secret show to launch it. It’s a unique and creative process every time. Our collaborations reinforce our unparalleled relationship with music through a series of online and in-bar campaigns, and they directly connect us with beer and music fans in a meaningful way.”

The new Walthamstow brewery is set to be a killer venue for new launches and celebrations, Signature are planning four seasonal parties a year, releasing new collabs and supporting their favourite bands. Located inside the brewery, The Brewer’s Bar allows drinkers to enjoy the sights, sounds and smells of the brewery, with tours on the cards for 2020 and film nights running every other Thursday. In March 2020 the brewery will be taken over by the front-women of the Manchester Punk Festival who will collaborate with Signature on a beer made for International Women’s Day, to be sold at MPF, and celebrated with a day of female-fronted performances. 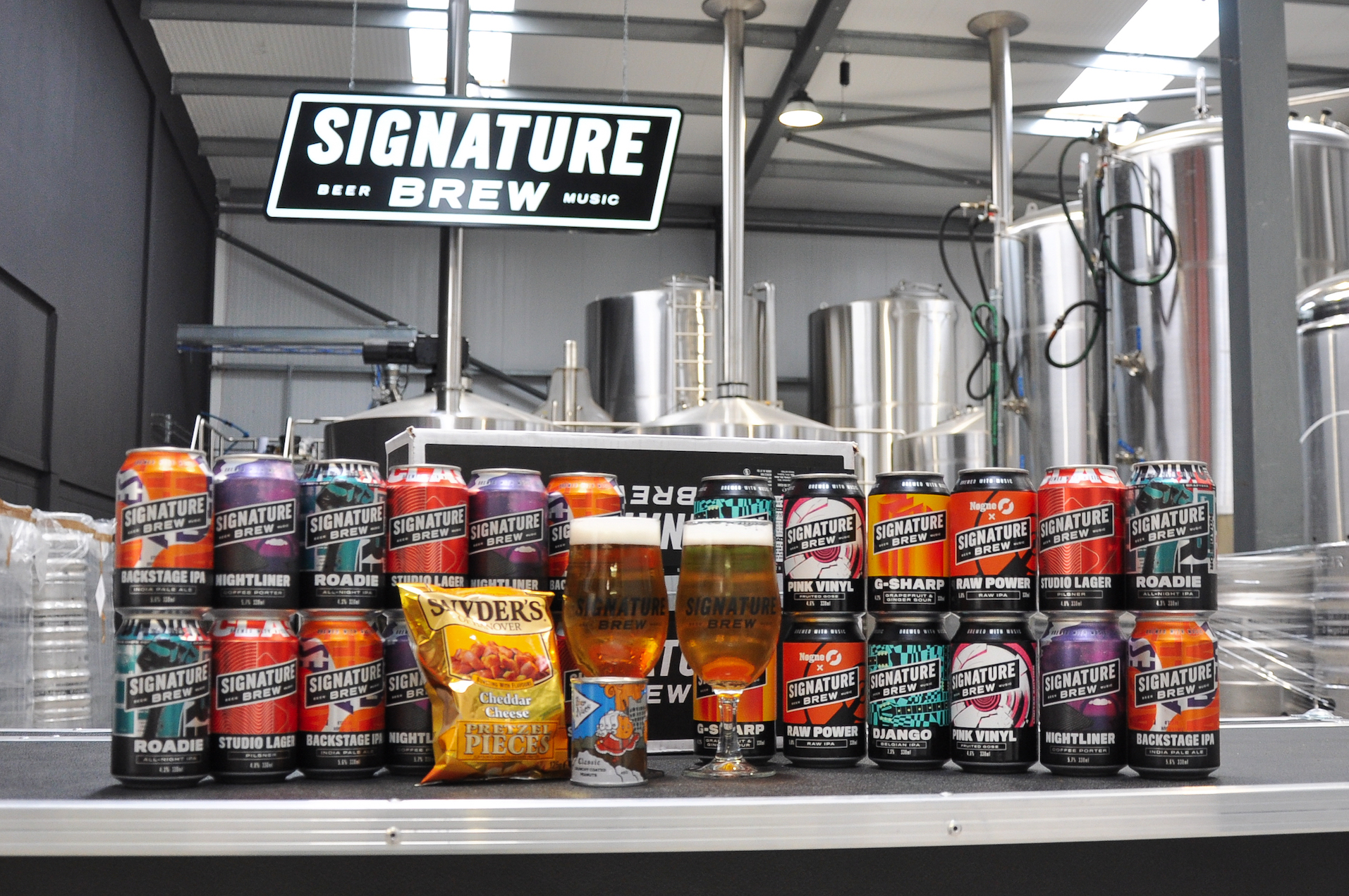 Signature’s original venue is based in a railway arch next to the Regent’s Canal in Haggerston, East London; The Signature Brew Taproom & Venue is a place where great beer and great music collide.

Seven days a week the space serves up huge tunes, live events and, of course, the freshest Signature Brew beers available, straight from the brewery; new for 2020, hot pizza will be delivered by Yard Sale all week long.

Greedy Signature Brew fans won’t go hungry; Walthamstow is also the location for The Collab, a suitably named beer & burger bar, Signature Brew united with We Serve Humans to deliver champion beers alongside world-class burgers, wings and more. Winner of The Best Burger In Britain (Inapub Magazine) and Best Buffalo Wings (Wing Fest), We Serve Humans’ only mission is to dish up the greatest burgers, wings and fries on Earth. All of their food uses only the finest ingredients including aged Suffolk beef and free-range chicken. They’re also dedicated to offering incredible vegetarian and vegan options – there are absolutely no half measures here. Sit in and pick Signature Brews from the taps, order The Collab to your table at The Brewer’s Bar or Deliveroo the lot to your house, E17-ers are fully covered.

Signature is also central to a new wave of beer havens in the up-and-coming Blackhorse Road area of Walthamstow; The Blackhorse Beer Mile is gearing up to rival South London’s Bermondsey Beer Mile’s crown for London beer devotees. Start your session with Signature Brew’s new home for beer and music, The Brewer’s Bar, take the short stroll to Exale’s brand new bohemian microbrewery, stop in for a swift one at the Wild Card Brewery Taproom, wend your way back to Pillar’s Untraditional Pub at Crate’s new shipping containers of beer & street food and end your pilgrimage at The Collab with a juicy burger & fries. With breweries including Trumans, Forest Road and more incoming, the Blackhorse Beer Mile is already proving itself as East London’s must-visit location for craft beer drinkers in 2020.

Signature Brew’s beers are rolling out now around shops, bars, pubs, venues and festivals around the country, with more stockists and ground-breaking collaborations to follow from Spring 2020.