Posted on June 4, 2014 by DrinkPreneur in Beverage News, Packaging 0 Comments 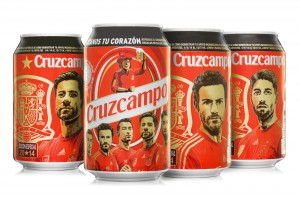 Rexam, a leading global beverage can manufacturer, has been selected by Heineken Group to launch a range of limited edition Cruzcampo beer cans. The cans celebrate the brand’s on-going sponsorship of the Spanish national football team ahead of the 2014 World Cup.

Commenting on the partnership with Rexam, Product Manager at Cruzcampo, Christina Ojeda says, “The experience of working with Rexam is second to none. The team’s proactivity and versatility in the development and design process was vital in creating such stand-out cans.”

The cans are sold in Spanish off trade channels, available in 33cl and 50cl formats. They are part of a wider summer marketing campaign highlighting Cruzcampo’s sponsorship of the national football team.