Posted on October 2, 2014 by Richard Hall in Beverage News 0 Comments 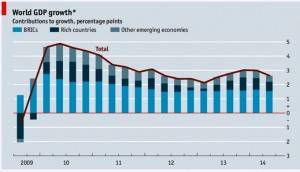 All this is captured in the most insightful single line I have ever seen – The Economist magazine’s regular chart on overall global economic growth.

The commentary on 13th September highlighted that: