Posted on July 25, 2016 by DrinkPreneur in Beverage News, Marketing 0 Comments 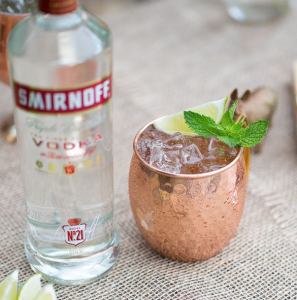 Cocktail trends come and go, but no vodka cocktail is more iconic than the Moscow Mule. Today, cocktail menus across America feature the Moscow Mule and creative variations of the recipe—but there’s only one original. As the co-creators of the original Moscow Mule in 1941, SMIRNOFF™ vodka and Cock’n Bull® Ginger Beer are celebrating seventy-five years of America’s first vodka cocktail. 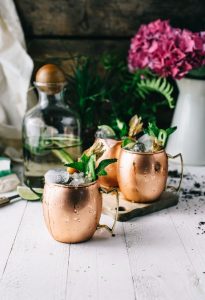 In the late 1930s, John G. Martin was the president of an American alcohol company, Heublein, which owned the rights to SMIRNOFF™ vodka. One historic day seventy-five years ago, in 1941, Martin sat at the bar of The Cock’n Bull, an iconic pub on Hollywood’s Sunset Strip, with owner Jack Morgan. At a time when brown spirits were king, Martin was struggling to market his newly acquired vodka to American palates. Morgan, too, had a dilemma: few people cared for or even knew about his ginger beer. Martin and Morgan made cocktail history when they created a solution to sell both products by combining SMIRNOFF™ No. 21 vodka with Cock’n Bull® Ginger Beer and a spritz of lime in a copper mug. This was the world’s first Moscow Mule.

Following the creation of the cocktail at The Cock’n Bull, Martin travelled to bars around the United States encouraging bartenders to make a Moscow Mule, giving each of them an instant photograph of themselves with the final creation. Martin took a copy of the instant photograph on to the next bar, encouraging other bartenders to make the cocktail and eventually sparking a frenzy for the Moscow Mule across the country.

“In only a few short years, the Moscow Mule took America by storm and gained popularity in cocktail culture, paving the way for many other popular mixed vodka drinks including the Screwdriver, the Bloody Mary, the Gimlet and more,” said Jay Sethi, Vice President of Marketing, SMIRNOFF™.

“Today, 75 years later, the Moscow Mule is experiencing a comeback as one of the most popular cocktails in the U.S., and naturally, the makers of SMIRNOFF™ vodka are celebrating.” 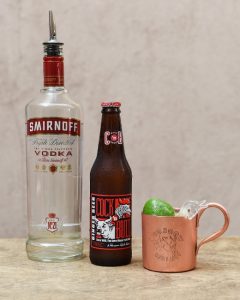 To kick off the celebration of this milestone anniversary, SMIRNOFF™ hosted a series of immersive dinners at the 14th Annual Tales of the Cocktail, one of America’s premier spirits festivals that highlighted the Moscow Mule during an annual cocktail competition. Throughout the evening, invited guests of legal drinking age were transported back in time to experience the story of the Moscow Mule in a pop-up restaurant modelled on the historic meeting between John G. Martin and Jack Morgan. Guests responsibly sampled original Moscow Mules, made with SMIRNOFF™ No. 21 vodka and Cock’n Bull® Ginger Beer.

For 150 years, the SMIRNOFF™ brand has been enjoyed by legal drinking age consumers around the world, but it wasn’t until the Moscow Mule was created that vodka became a popular spirit in the United States. The mixability of SMIRNOFF™ vodka and its quality have inspired other vodka varieties across the globe and served as the basis for popularizing some of the world’s most famous cocktails.

No matter when or where you craft an original Moscow Mule to commemorate this tremendous milestone, please remember to always enjoy it in a copper mug and drink responsibly.