Posted on July 14, 2016 by DrinkPreneur in Beverage News, Ingredients 0 Comments 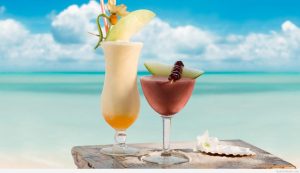 Summer is in full swing and while the Harris Poll recently learned that your favorite alcoholic beverage often depends on who you are and where you are, it can also depend on what season it is! According to drinking-age Americans who plan to imbibe this summer, it’s clear they’re looking for something to beat the heat – nearly two thirds (65%) say refreshing is what they’re most likely to look for in an alcohol beverage this summer.

According to Danelle Kosmal, Vice President of Nielsen’s Beverage Alcohol Practice, “During the summer, consumers are often looking for specific qualities in their adult beverages to help satisfy their summer thirsts. Beverage alcohol manufacturers have introduced a crop of new products that perfectly align with consumers’ summer drinking preferences. This season, the newest products quickly gaining attention across the country include wine in a can, catering to the ‘on-the-go,’ outdoor summer lifestyle, and refreshing hard sodas and seltzers.”

However, flavor preferences do differ by gender. Women are more than twice as likely as men to seek something fruity (51% vs. 24%), and they’re also more likely to prefer:

Men, on the other hand, are more likely to desire something natural (23% vs. 14% women) or handcrafted (18% vs. 9%). While less popular in total compared to other characteristics, men also preferred spicy, smoky, or bitter drinks more so than women.

Cheers to the great outdoors

Some locations are particularly popular among Millennials (aged 21-34), including:

Summer drinkers’ favorite alcohol beverage to drink between May and August is beer, followed by spirits/cocktails, while some just want “something fruity” or “anything cold and tasty.”

Among those who drink each type of alcohol at least several times a year, substantial percentages of adults 21+ are more likely to enjoy the following during the summer compared to other times of the year:

To see other recent Harris Polls, please visit their website.