Organic Hemp Milk: The Next Big Thing In Beverage Industry? 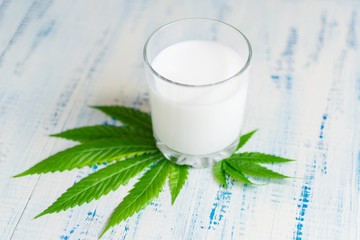 A plant that has miraculous benefits from seed to leaves, Marijuana has managed to seep into the headlines for a few years now. With legalization in a few states, Florida marijuana doctors have also been widely prescribing the same for various ailments.  This attention has also got a few heads turning towards hemp and related products. Hemp is a sister of Marijuana which is legal and is basically used for the purpose of deriving various products from the same. A variety of hemp products have been stacked up in stores from clothing to cosmetics, more info about which is easily available. The new addition to this list is the Hemp Milk.

The battle for the worthiest substitute for dairy has seen some challenging products such as soy and almond milk. Awareness about health is causing people to adopt such alternatives to dairy products which are further fuelled by allergies and veganism. The newbie to this list is hemp milk which is considered to be a nutritious alternative to dairy. With movements focussed on eliminating dairy across the world , can hemp milk be a worthy substitute to take its place?

Know about Hemp and Hemp Milk

Hemp is considered among the highest sources of protein which is plant-based. It is considered superior to even including meat in your diet and the protein is cold pressed rather than chemically extracted like other cases. It is a rich source of magnesium, calcium, zinc, iron and vitamin B1 and is also rich in Omega 3 and Omega 6. In fact, this is the best and vegan source for obtaining omega other than fish.  Hemp is also

said to have properties that are capable of DNA repair. Unlike Marijuana, they have very low THC and do not give a high.

Hemp Milk is prepared similar to that of almond milk wherein the hemp seeds and water is a blend. Nutritionally the presence of calcium and protein along with Omegas make hemp milk a very healthy alternative to existing dairy. Hemp milk is usually cold pressed and does not contain any artificial sweeteners or gums unlike in case of other substitutes. It has a nutty flavor and a similar texture to that of soy milk. While the texture is not comparable or pleasing as it is in case of cow milk, flavoring does give good taste.

The Benefits of Hemp Milk

Low immunity exposes you to falling sick more often. Marijuana doctors suggests regular consumption of hemp milk as it can naturally boost immunity and help you lead a healthy life. 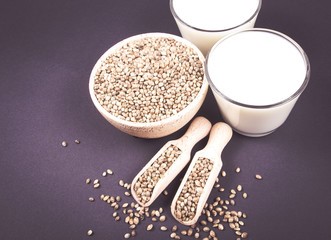 While common household skin regimes include milk substituting hemp milk here could be a great way to attain healthy skin.

Increasing veganism has to lead the search for worthy substitutes for dairy products. Hemp milk is a vegan, plant-based milk which is raw and a healthy source of protein.

It is rich in protein and contains 10 essential amino acids for your body.

Hemp milk acts as a natural source of vitamin D, A, E, B2 and B12 and hence helps in healthy functioning of our body.

The Outreach and Interest from Customers

Hemp milk has reached store shelves in just a few places around the world such as in Europe where it has also directed a lot of interest from the customers. The market is expected to expand further into North America, Latin America, Asia Pacific, Africa and the Middle East in the coming years. Hemp products are expected to becoming most famous in the market.

The one area that has shown a significant disadvantage for hemp milk is consumption by toddlers or babies.

The necessary nutrients expected to be delivered by infant formulas are not available in hemp milk. Also, the number of calories present in hemp milk is comparatively higher than that of soy or almond milk and this number increases with flavoring such as chocolate. So, hemp milk may not be the right choice for those looking for weight control or reduction in general.

Plain hemp milk is available with added flavors of vanilla and chocolate for those who may not enjoy the original taste. A plain hemp milk does not contain any sugar or gluten and is hence a healthy drink to enjoy. Apart from these, storage requires refrigeration only after the pack is opened thus making including hemp milk in your everyday diet a cake walk as long as you get used to the taste. The current prices seem to be a matter of concern to most although based on demand and new brands that will emerge, this problem might be overcome eventually. 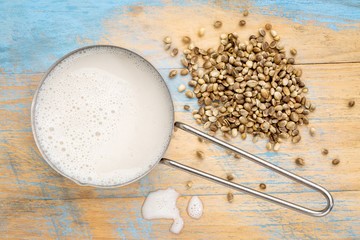 So far allergies towards hemp have not been common as it is in case of other alternates. Given this eliminates lactose intolerance and nut allergies out of the picture the number is quite low so far. The biggest strength of Hemp over other alternates is that it is a GMO plant and hence the nutrients of the soil remain intact. There are usually no chemicals used during the process as it is not required and the water required is also significantly less than in the case of almond. With rich yield possible even in such minimal requirement environment, hemp milk could just be the next sustainable alternative to dairy across the world.

Kathy has been closely studying the cannabis industry trends from quite some time. Intrigued by the booming growth of this sector, she takes interest in penning down her views providing quality insight on current marijuana trends, particularly medical cannabis. She is currently associated with cannabisowl.com

View all posts by Kathy Cooley →