Posted on April 26, 2018 by DrinkPreneur in Beverage Innovations 0 Comments 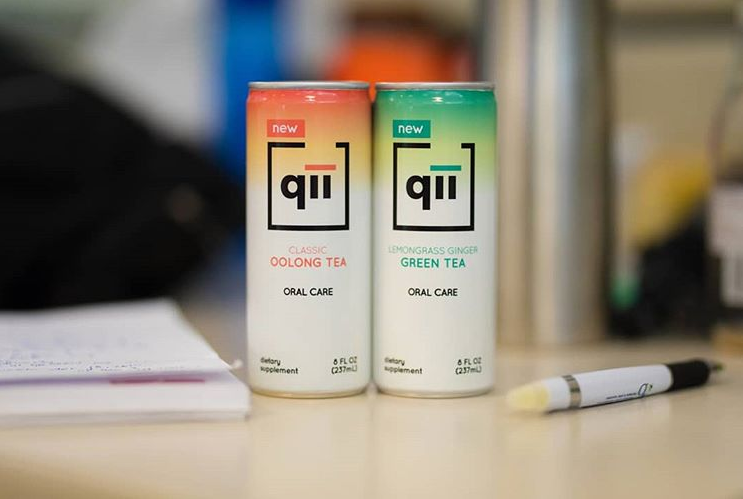 DoseBiome has announced their new findings that qii, the world’s first functional drink for oral health, can reduce up to 52% of dental plaque with each serving. This news coincides with the addition of three new fruit flavors to their lineup – White Peach, Pomegranate and Lychee Tea.

A resident within Johnson & Johnson Innovation, JLABS @ Toronto, the team at DoseBiome has spent the past few years researching the bacteria and plaque that cause cavities, gingivitis and bad breath. “The oral microbiome is an emerging area of research centered around the relationship between beneficial and harmful bacteria. Our team is comprised of PhDs from the fields of microbiology, food science and dentistry who are dedicated to finding innovative ways to improve oral health,” says founder Ted Jin. “In understanding harmful bacteria and how they form plaque, we have effectively found ways to reduce both, leading to the development of qii.”

No stranger to the industry, Jin is an Oral Care (Crest, Oral-B) and PepsiCo (Pepsi) alum who is taking full advantage of his background. “It just made sense – trying to take the bad habit of drinking sugary beverages and replacing it with a good habit that satisfies your craving and takes care of your mouth,” he remarks.

Bacteria in the mouth play a key role in the development of oral disease and overall health. A twice daily regimen of brushing, rinsing, and flossing can keep that harmful bacteria in check. However, in a survey published by Delta Dental, brushing habits are far from perfect with 23% of Americans having gone two days without brushing in the past year. qii is revolutionizing oral health in the form of a functional on-the-go drink that is effective, affordable and enjoyable. “We believe it’s important to brush twice daily and regularly visit your dentist. If you can’t, we want you to do the next best thing – drink qii,” says Jin.

qii has a neutral pH of seven that helps to maintain a healthy oral environment. The drink is also powered by a proprietary ingredient called XyVita™, which is a xylitol-based sweetener. While those two factors may not seem like a big deal, recommendations from dentists say it is. “Dental cavities are caused by harmful bacteria that produce acids which wear away at enamel. Sugars are a food source on which these bacteria feed and thrive, but bacteria can’t thrive on xylitol,” says Dr. Chessia Matthews, DMD. “Substituting your everyday beverage for qii is a recommended step as the neutral pH and xylitol-based formula won’t contribute to cavities”.