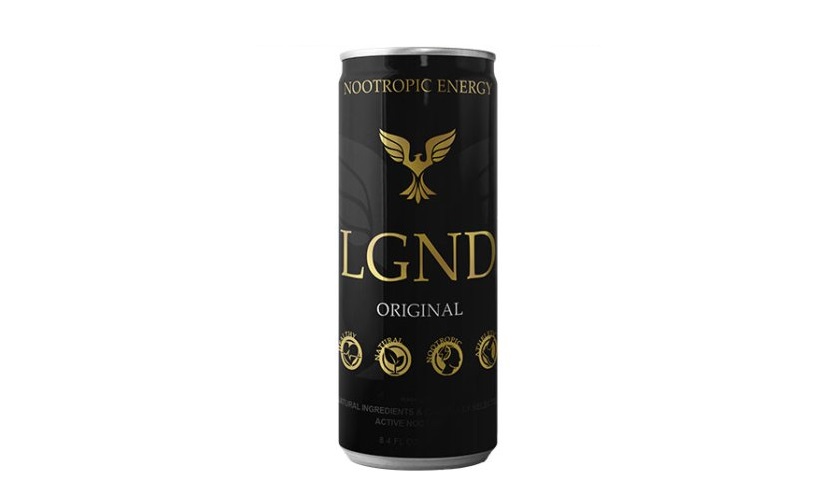 This exciting new company is the first of its kind in the energy drink world. It features a nootropic formula which means that it is packed full of ingredients that not only energizes you, but provides you with the fuel you need to challenge your mind and push forward mentally. With expanded capabilities and possibilities, this is more than just an energy drink; it could in fact give you the fuel you need to effectively conquer your schedule.

What makes this formula unique, is the nootropic profile that not only provides you with long-lasting energy, but it actively works to strengthen your daily performance. LGND Original is the first globally marketed energy drink with this type of profile. When you try this new energy drink, you could potentially find just what you have been looking for to be more successful in your daily life.

The word nootropics comes from the Greek word “noos” which means mind, and “trope” which means turning. These substances are potentially capable of positively boosting your mental, and cognitive abilities. In addition to assisting in your cognitive abilities, LGND’s products will also give you a smooth energy boost to help you successfully complete your daily tasks.

The active nootropic ingredients used in LGND’s products are Acetyle L-Carnitine, Alpha GPC, N-Acetyl L-tyrosine, Citicoline, L-Carnitine, Bacopa Monnieri and Turmeric root extract, as well as natural green tea extract and a caffeine.
Drinking LGND’s products could potentially help you build and maintain a healthy level of these nootropic substances that are highly recommended to aid you in your focusing abilities, memorization, and the ability to properly execute both mental and physically demanding responsibilities.

Why is LGND Unique? Isn’t it Just Another Energy Drink?

LGND’s functional beverages theoretically helps you identify your edge, and sharpen it to its greatest point. Specifically speaking, LGND’s products will give you that much needed quick energy boost without the usual crash-and-burn sensation that you experience with many other energy and coffee drinks in existence today. LGND effectively energizes you, supplying you with strong long-term effects. In short, LGND will ideally wake your brain and body up, preparing you for whatever your schedule might bring.

What is LGND and what is your vision?

We like to see ourselves as pioneers on the energy drink market with a vison to change the norm for what an energy drink is and what to expect from it. We believe that the products that you see on the market today are either very unhealthy or do not deliver what the consumer is looking for. Consumers want a product that will give a quick but sustainable energy boost without, the all to well-known, crash-and-burn effect and on top of that it needs to be healthy.

Where did the idea come from?

Actually it goes back 12 odd years to when I was an engineering student. I was getting tired of the negative effects high doses of caffeine and sugar had on my body, mood and mind. Me and my friends started to look for healthier alternatives and considered how we could design a healthier and more sustainable alternative to coffee and energy drinks. We never went any further with the idea at the time but it’s always been with me since.

How will your product live up to your vision?

Our product has been lab-engineered using only natural ingredients and the result is what we’d like to call an energy drink with a nootropic profile. To put it simple, our products have been designed to not only give a quick energy boost but also to help the performance of cognitive abilities such as focus and memorization.

Can you elaborate on the term nootropic?

Nootropic or nootropics are active substances that helps your cognitive performance. Nootropics isn’t anything new, the term was coined during the 70s. Most people might connect it with smart drugs and unfortunately it has a bit of bad rep due to misinformation. Nootropics isn’t anything more special than caffeine, essentially caffeine is a nootropic, but it isn’t until recent years that good and reliable research has been released on the subject.

What role do you think nootropics will play in the energy drink industry?

I firmly believe that nootropics will be the next norm for energy drinks, within the next few years we will see a steady rise on functional beverages utilizing nootropics for their cognitive benefits. As I said, nootropics isn’t anything more special than caffeine but has the potential to be just as common as caffeine and caffeinated beverages. There are already a variety of companies selling nootropics in pill or powder form.

Why hasn’t it been done before?

It has been done before, nootropic supplements have been popular in high performing work environments such as Silicon Valley for a few years. The reason why it isn’t more widespread is because of two major factors; one is that the price for the supplements is fairly steep and secondly is the lack of information spread. There are a few beverages on the market with active nootropic ingredients but the price per “pop” is on the higher scale.

Last question, where do you see LGND in the next five years?

The vision is to be a pioneer on the functional beverage market and we hope and believe that we will be able the change the norm for energy drinks. Five years is short time on the grand scale but I’m confident that we’ll be one of the major players within the energy- and functional beverage industry.

If you decide to give LGND;s products a try, you will most likely be pleasantly surprised with the benefits you experience throughout your day. Regular consumption of LGND energy drinks over a lengthy period of time, is ideally supposed to provide you with the best possible effects, both mentally and physically. At the very least, it will provide you with smooth, effective energy to help you through your daily tasks.