Posted on July 21, 2016 by DrinkPreneur in Beverage News, Marketing 0 Comments

Two years ago, ROK and the Bogart Estate created Bogart Spirits and launched Bogart’s Gin internationally. The success of that launch convinced the partners of two things: before its U.S. launch, Bogart Spirits needed to acquire its own distillery and grow its product line.

ROK Stars CEO Jonathan Kendrick explained: “The demand we saw internationally, combined with the U.S. pre-orders, made it clear that we needed our own dedicated distillery to guarantee supply. And since we’re building a brand dedicated to an American film icon, it seemed only right that our distillery should be in California. 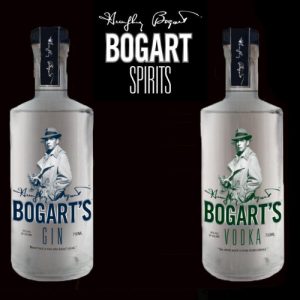 Our fantastic Bogart’s Vodka will now join our Bogart’s Gin, and we are planning to further expand our product offerings in the relatively near future. Let’s just say that a drink Bogart would have loved is aging as we speak.”

The new distillery is operated by award-winning Master Distiller Lee Palleschi, former owner and creator of the Cold House Vodka brand. In addition to bringing production home to California, Bogart Spirits has upgraded the Bogart’s bottle. The new custom-made bottle features an image of Humphrey Bogart, silk-screened labels, a great Bogart quote, and Mr. Bogart’s signature engraved on the back of the bottle. John Paul DeJoria, co-founder of Patron Tequila, said: “This is a premium product in every sense of the word. The gin and vodka are absolutely perfect, and the bottle looks fantastic. We are very proud of our Bogart brand!”

“We couldn’t be more pleased about our partnership,” said Stephen Bogart.

“The international launch has been wonderful, the new bottle is great, and I am especially thrilled that we have brought our production back to the United States. My father loved this country, and the fact that we are lucky enough to be able grow our company and create jobs here is a wonderful thing.”

Bogart Estate CEO Robbert de Klerk added the following: “Jonathan and John Paul are great partners. They truly understand what Humphrey Bogart stood for, and they have created a company we can all be proud of: a premium U.S.-based spirits company that pays tribute to an American icon.”