Posted on May 2, 2019 by DrinkPreneur in Marketing 0 Comments 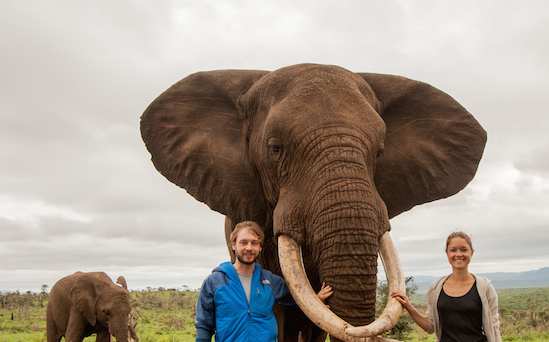 Elephant Gin founders, Tessa and Robin Gerlach, were inspired to create their range of premium gins following their adventures in Africa. They strongly believe that this generation has a responsibility to protect the future of African wildlife. In 2013, they developed the multi award-winning Elephant London Dry Gin (45%) that uses rare African botanicals and focuses on resolutely artisan production methods. Since December 2015, the company has complemented its portfolio with an aromatic Elephant Sloe Gin (35%) and in March 2017 introduced a full-bodied Elephant Strength Gin (57%).

Elephant Gin gives back to what inspired the gin from the outset: elephants. Every year more than 35,000 elephants are killed because of uncontrolled ivory poaching; that’s one every 15 minutes. Elephant Gin contributes 15% of bottle proceeds to African elephant foundations in an effort to support the preservation of African wildlife and help ensure future generations will be able to explore these magnificent landscapes. 2019 sees Elephant Gin announce in excess of 500,000 Euros raised for the protection of African elephants from the sale of Elephant Gin and the brand’s special events.

For each full-sized bottle sold, 15% of profits are donated to Big Life Foundation and Space for Elephants; while with each miniature bottle, Elephant Gin contributes 15% of profits to Sheldrick Wildlife Trust. All of these organisations are devoted to the conservation of the African elephant and devotees of the brand and animal lovers are able to track the progress made as funds are raised.

Tessa explains, “Elephants have always fascinated me and with horror I realised that poaching, and ultimately the prevailing poverty in Africa, is driving the African elephant to extinction. Elephants are one of the oldest species of animals, fascinating and intelligent, that have lived in ​​southern Africa for thousands of years and have survived many natural disasters and natural predators. It’s frightening that that the only species that threatens this gentle giant is humankind. That’s why from the very first bottle sold in September 2013, we have given 15% of bottle profits to organisations that are devoted to the conservation of the African elephant.”

Space For Elephants is focused on restoring the old migratory routes that were lost when game reserves were fenced, and aims to give freedom to thousands of elephants to range freely across Africa. In addition, Elephant Gin has funded an education centre focused on elephants.

Sheldrick Wildlife Trust is known as the most successful orphan-elephant rescue and rehabilitation program in the world. Its elephant orphanage near Nairobi nurtures orphaned elephants that have been found in the wild – often either left behind when their mother dies due to poaching or other human intervention. Each baby elephant has the support of a dedicated team to nurse them back to strength and to rear them in such a way that they can return to the wild when grown.

With Space For Elephants Foundation, Elephant Gin have recently funded and opened an education centre focused on elephants, The Wildlife Spirit, located in the Pongolapoort Nature Reserve in KwaZulu-Natal, South Africa. First proclaimed in 1894, it is the second oldest reserve in the world and the oldest in South Africa. It’s home to an impressive collection of wildlife and vegetation. In addition to the two breeding herds of African elephant, there are also hyenas, buffalos, rhinos, leopards, zebras, wildebeests, giraffes, and impalas. The aim of the program is to teach locals as well as tourists about the threats elephants face today, the important ecological role of elephants, and the demand for conservation.

The education centre was built and is run by members of the Zulu community; providing jobs for people who otherwise may be tempted to work or trade on the black market. This strategy is coming to fruition as people are taught how to attract tourists and offer tours around the landscape; holidaymakers keen to see the centre in person, can enjoy safari visits to the elephants and the array of wildlife, the botanical garden and its many lookouts onto Lake Jonzi, they can learn all about elephants and even make elephant dung paper; for the ultimate memorable occasion, visitors can host a wedding at the centre; there are many local lodges and camps, including the Jozini Tiger Lodge or the White Elephant Safari Lodge.

Rather than simply assigning funds to the cause so close to their hearts, Tessa and Robin are very hands-on with the foundations and their funds. As Tessa explains, “Robin and I fly to each foundation at least once a year to check in on ongoing projects, learn about difficulties, new opportunities and meet new team members. Working in South Africa and Kenya is way different to what we know from Germany or the UK; so visits are absolutely essential (and so worth it!). Every year we take the team to visit the foundations and allow them to make their own African experiences”.

With plans to open their own distillery in 2019, Elephant Gin look on the future of wildlife conservation with a positive and proactive mindset, despite some gloomy forecasts, “The way we remain positive about it is that we do see a change. Prior to Big Life in Amboseli, the question was not if an elephant would be killed, but when. Since their multiple fully-equipped teams of rangers have been placed, Big Life has made over 1,030 arrests and experience only a handful of poaching incidents per month within their area of patrol that spans almost 2,000,000 acres. In South Africa by contributing to Space For Elephant’s Relocation Fund, we have supported the move of a herd of elephants that was threatened to be killed in South Africa, to Swaziland where they are safe for the time being. China, the U.S. and Hong Kong have also declared widening their ban on ivory imports as the topic is getting more and more attention from the press and politicians. I cannot stress the importance of spreading awareness of the dangers that are threatening not only the elephants, but our entire planet. Absolutely everyone can get involved today, by firstly informing themselves about the topic (watch the film The Ivory Game), follow the foundations’ activities and spread awareness.”