Posted on September 30, 2016 by DrinkPreneur in Beverage Innovations 0 Comments 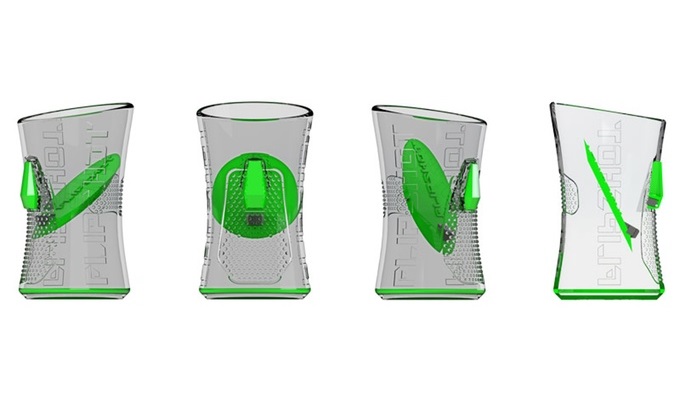 Joshua Civelli and Derek Ogden, the two founders of U.S. based start-up Off the Wagon LLC, have launched a crowdfunding campaign on Kickstarter. This campaign has a funding goal of $20,000, which needs to be raised in order to bring their flagship product “FlipShot” to market.

FlipShot is a unique, dual-chambered shot glass that enables consumers to drink a shot of liquor and immediately chase it with a second beverage in order to get rid of that infamous hard liquor “burn”.

The team states, “While some crave that challenge of a burning throat and intense taste, most of us just want to drink the shot and let the good times roll. With FlipShot you can imagine that smooth aftertaste of the chaser and not your ridiculous face after a liquor only shot, so you can get back to being the life of the party!”

The team at Off the Wagon wanted to create a product that would allow people to have a great time at a party or outing, without becoming the star in that infamous “after-the-burn face” photo. The peak burning sensation usually occurs within 1 – 4 seconds after swallowing a shot of liquor.

So the team put their heads together and came up with a way to stop the burn before it starts. FlipShot, the result of mechanical engineering, physics, and ingenuity, delivers the chaser 1/3 of a second after consuming the shot, which means the major burning sensation is stopped before it begins. To use, simply put the chaser in first, push the button to move the chaser to the bottom chamber, pour in the liquor of choice. Now drink the shot, then push the button and drink the chaser.

The team at Off the Wagon has been working very diligently on all of the essential groundwork for FlipShot and they are now ready to begin the process of bringing the shot glass to market which is why they have launched their Kickstarter campaign, and hired a team of crowdfunding specialists to help them spread the word.

As an added bonus with this campaign, the team is offering supporters the opportunity to pre-order FlipShot from a single shot glass to various specialized multi-packs at a substantial savings off of regular retail pricing.

The team expects to begin manufacturing during December 2016, with a projected delivery date of February 2017. Full details can be found on their Kickstarter campaign page.

Source: Off the Wagon LLC