Posted on February 8, 2017 by Ugne Butkute in Beverage Startups 0 Comments 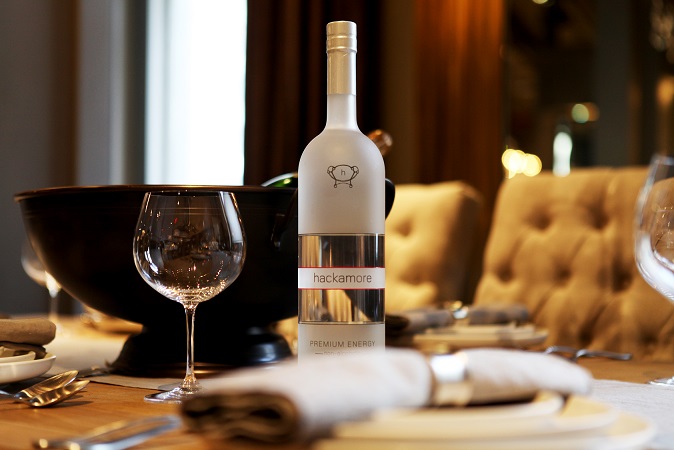 The beverage industry is full of a wide variety of products. Even when you think you can’t choose among brands, flavors and type of drinks, there are always some brands that stand out. The New York-based Hackamore brand presents a truly interesting product. With a design reminiscent of a vodka product or energy drink, Hackamore brings new meaning to “shots night”.

How did Hackamore begin?

The story behind the premium energy drink is actually a mixture of embarrassing and hilarious. I came up with the idea for Hackamore whilst out on a blind date with a fellow Brit at an Italian restaurant in New York. Whilst I was expecting an avid tea drinker like myself, I was greeted with quite the opposite – a rather lanky fellow downing a can of Red Bull. After he finished slurping down his fourth can of Red Bull, I began to get concerned for his health and honestly my safety with this stranger; so I reluctantly confronted him because evidently there was something not quite right.

My now overly hyper date responded that he was a recovering alcoholic and had consequently picked up an addiction to canned energy drinks because when he was out with his friends he struggled to stay awake until the early hours. After an impressive eight Red Bulls we decided to relocate to an upscale club in Soho, to my dates strong distaste they did not serve energy drinks, needless to say the date quickly came to an end.

This blind date was the true catalyst to the journey I have been on to create the premium energy drink Hackamore, I wanted to provide something originally for the sober market – A drink that resembled alcohol but obviously offered a true benefit to the consumer – keeping them awake whilst in a clean way with natural caffeine, without calories or sugars/sweeteners and ticking all of the boxes being gluten-free, vegan and kosher. After creating Hackamore ironically the mixology world picked up on it and it became somewhat of a hit in the drinking world as well as the non-alcoholic one.

At the time I went into this blind as a 20 year old student and completely unaware whether this could even be achieved. Fortunately I have continued on this exciting journey and acted as a sponge with everyone I have met in the beverage industry and created what I truly think is the future of energy drinks.

It might be risky to present innovative products to the market. What indicators show you that people are searching for a new kind of energy drink? 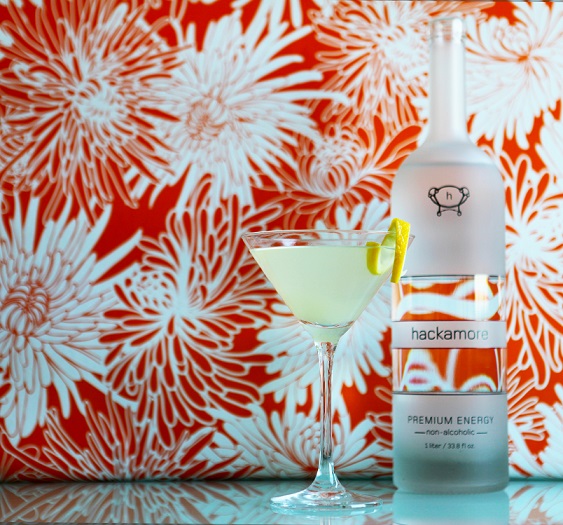 The market need for Hackamore premium energy is one of the most evident on the beverage scene. The ultimate reasons Hackamore is needed on the market is because of its premium packaging, its timely health-oriented caffeine content and its versatility.

Sophisticated establishments do not want to serve canned beverages because it cheapens a venue, moreover people are embarrassed to be seen ordering or drinking a canned energy drink, even if the can is taken away the liquid is bright yellow and people know exactly what you’re consuming, as opposed to the clear Hackamore liquid.

Hackamore ticks all of the health boxes, not only offering a completely zero consequence drink without calories, sugars, sweeteners, gluten-free, vegan and kosher but also in a natural caffeine form (as opposed to most commonly synthetic).

The mixology market moreover has never previously been able to incorporate caffeine into any of their cocktails or non-alcoholic mocktails, Hackamore now offers them the ability to do so using less product in their drinks and making more money.

Top energy drinks on the market make on average $3 billion yearly in the US, and with the recent saturation of the energy drink market with not only new canned energy drinks but supposedly ‘healthier’ ones it is no secret that caffeine is a necessity in the beverage space along now with zero consequence caffeine being a must.

Tell us more about the idea of Hackamore. Why have you chosen vodka packaging for an energy drink?

Hackamore is the first energy drink that comes in a glass liter bottle – The exact same bottle as ‘Grey Goose’ vodka – This is done deliberately to highlight that Hackamore is ‘treated like vodka’ and served as a shot but also to allow the consumer to actually see what they are drinking, a clear and clean caffeine. The bottle further caters to the premium target market whilst boldly removing stereotypes of cheap, unhealthy, canned energy drinks and bringing to the table a luxury caffeine and a luxury experience.

Right now Hackamore has only one packaging. Are you planning to release a different size bottle?

We are currently manufacturing our exact replica miniature 50ml bottles and aim to start selling those Mid March 2017. These bottles contain one serving size.

What was the biggest difficulty creating and releasing such a product to the market?

The biggest difficulty was and still is educating the target market that healthier energy drinks do exist. Other canned energy drinks have tarnished the market with cheap synthetic caffeine and sugar-packed beverages. Hackamore is battling the stigma attached and making the consumer aware that drinking an energy drink is sophisticated when done with Hackamore.

Hackamore is a natural energy beverage. What kind of value does this add to Hackamore? 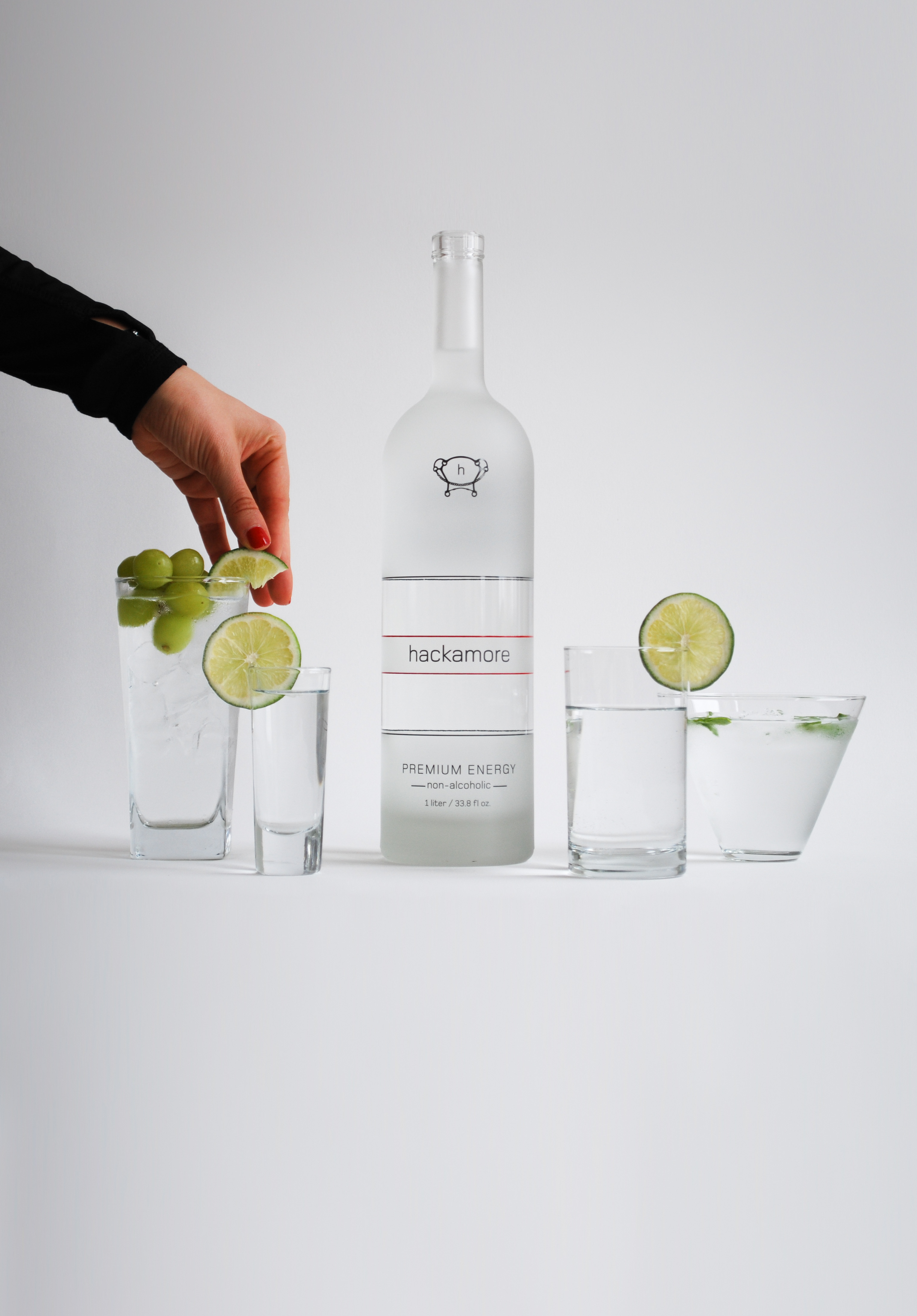 Natural caffeine means it comes from a botanical source (coffee beans in Hackamore’s case), synthetic is made in the labs. Our natural lime flavor is obtained through our high quality limes being expressed, distilled, and rasped. Expressed is a crushing of the lime and recovery of the oils after mixing with the acidic juice. Rasping is standard oil recovery from rasping the peel. Hackamore is natural caffeine in its purest form.

What advantages does Hackamore have compared to other energy drinks?

Hackamore is the first energy drink that comes in a glass liter bottle – The exact same bottle as ‘Grey Goose’ vodka – This is done deliberately to highlight that Hackamore is ‘treated like vodka’ and served as a shot.

Hackamore also offers caffeine in its purest form, being naturally caffeinated (extracting our caffeine from coffee beans) and then adding to that flavor our high-quality distilled limes.

Hackamore is moreover the first energy drink catered to the mixology world – with a highly concentrated caffeine content to allow it to be mixed with other liquors without diluting a carefully crafted cocktail and adding a boost of energy, whilst also strategically using the citrus lime base as a flavor profile to perfectly mix with any drink available on the market. Adding to this Hackamore is the first energy drink that does not require refrigeration even after opening (with a shelf life of over 1 year after opening) allowing it to sit up on the back of the bar with the spirits or in the speed rack.

Furthermore its packaging and serving concept also allow it to be what we believe is the first true liquor substitute, curing the common drawbacks of not drinking: feeling tired and not having a ‘real’ drink to order.

As a startup brand, what would you do differently from the very beginning?

This is a hard question to answer because as much as I would like to change some of the mistakes I made, many of these errors taught me a great deal of valuable knowledge in moving forward. I do believe though having a strategic plan in place for next steps and really concentrating on that is something I did not find easy.

When you have a startup brand you can become overwhelmed with the many routes and endless options you can go down for example pr, marketing, etc. We have now managed to put a very firm plan in place and stick to that as much as we can to get the most out of our team and achieve exactly what we want in the near future (that’s not to say a little off-roading is a bad idea).

Where do you see Hackamore in five years?

In five years I hope to see Hackamore having been the trend-setter and catalyst to a cleaner energy drink push. I further would like to see Hackamore being used worldwide in all the ways its versatility offers; whether that be supplying cocktail drinkers a clean energy boost, the sober market a liquor substitute or the gym fanatic a pre-workout kick!