Posted on August 24, 2018 by DrinkPreneur in Brand News 0 Comments 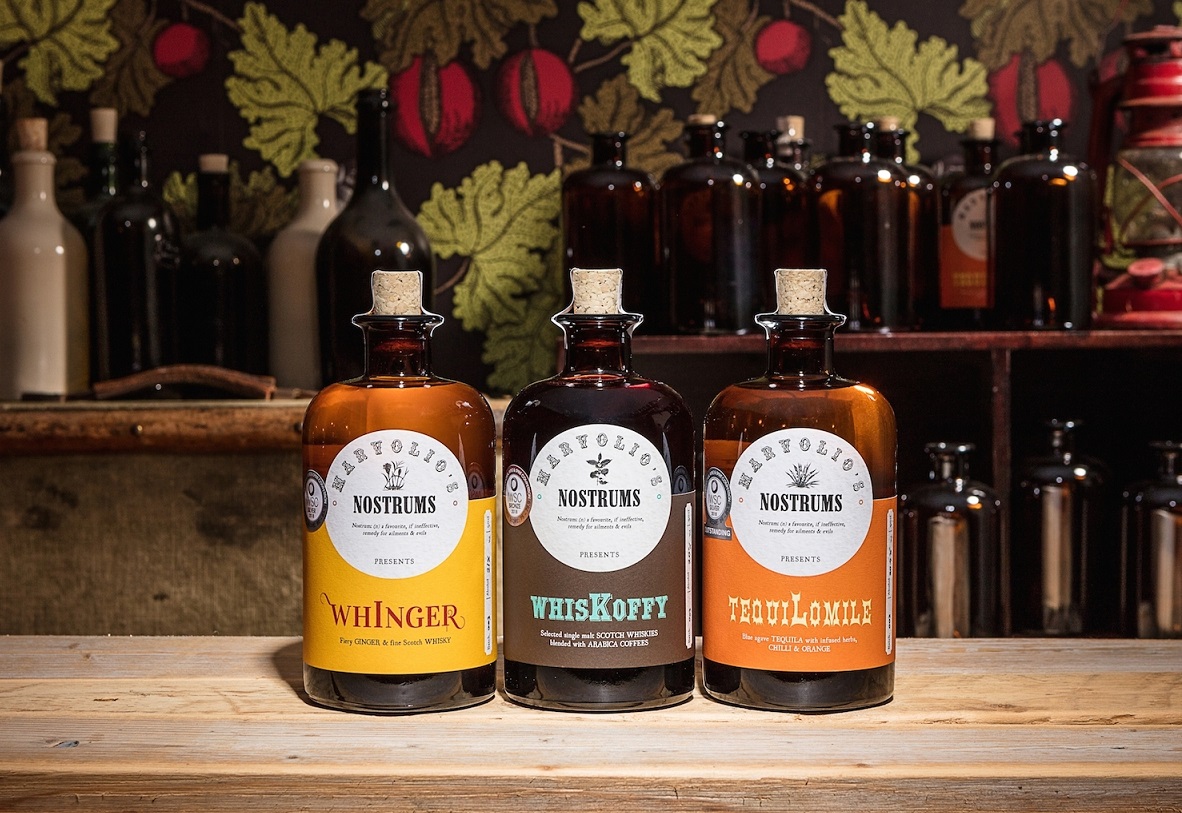 Sussex based startup business, Marvolio’s Nostrums, has launched with a trio of distinctive small batch liqueurs. Combining premium spirits with other fine ingredients to create complex and satisfying flavours, Marvolio’s offer something to suit all tastes and occasions; the award-winning brand create smooth Whiskoffy, a honeyed blend of malt Scotch whisky and 100% Arabica coffee; stimulating Tequilomile, tequila blended with herbs, chilli and orange and Whinger, whisky and ginger with a fiery kick.

Fresh from a clean sweep at 2018’s IWSC Awards, each of the Nostrums were medal winners, with Tequilomile winning “Silver Outstanding”, the judges describe it as “vegetal blue agave with a hint of salinity and a touch of citrus, lime and orange. Initial flavours of agave spirit: clean and soft with a hint of smoke. The chilli then follows, gradually building with an impressive heat that lingers on the palate and stays with the drinker for minutes after.” Whinger achieved a Silver medal and Whiskoffy was awarded Bronze.

Marvolio’s was conjured up by whisky-aficionado Joel Gallagher, having begun his career in Biotechnology, Joel took to his lengthy process of experimentation with a scientific approach; he says, “as a whisky lover, but with friends who found spirits too challenging, I was keen to create a drink that captured the sip and savour experience of premium spirits but in a more approachable way, to be savoured by both spirit and non-spirit drinkers alike. Soon, the resulting concoctions were getting such rapturous feedback, I realised I had to get serious about making more!”

Where many liqueur makers tend to focus on the flavouring to which alcohol is added, the Marvolio’s view is that the alcohol is a critically important ingredient that should be of an exceptionally high quality in itself, giving fundamental backbone to the overall flavour. The additional ingredients follow a long and careful process of sourcing and experimentation to complement and enhance the starting spirit but in a gentle and more approachable way.

Ideal for gifting, Marvolio’s Nostrums are housed in attractive apothecary bottles. Each drink is designed to be enjoyed neat, at a slow pace; however, if the wind takes you, the Nostrums give body and interest to classic cocktails such as the Tequilomile Margarita and they make outstanding food parings, think Whiskoffy with a bitter chocolate mousse or Tequilomile with zesty ceviche.

After years of experimentation with glass vials and pipettes littering the workstation, Joel’s alter ego of sorts is “The Great Marvolio”, an old-fashioned potion making quack doctor and the inspiration for the Nostrums of today. So whilst the tinctures may have no medicinal benefits, they are sure to entertain and delight the palate…whatever your poison!

Find Marvolio’s Nostrums at Majestic Wine as well as online via Amazon, Master of Malt and The Whisky Exchange.